OUT OF AFRICA: The drum's evolution takes the spotlight at Institute of Jamaica's Grounation 2015 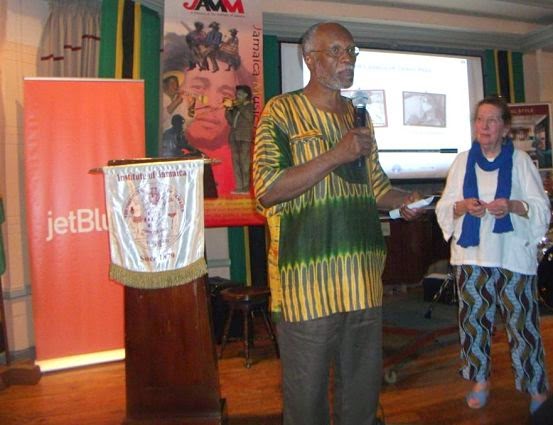 ON THE FLOOR: Miller addressing the gathering at the IOJ, while Gordon looks on.

For centuries the African drum has been casting its rhythmic spell as a medium of musical entertainment and communication and, by all accounts, the instrument's appeal and influence is as potent as in years past. You will get plenty of evidence while absorbing the lectures, video presentations, live performances and demonstrations that make up this year's Grounation series, put on by the Jamaica Music Museum at the Institute of Jamaica, on Sundays throughout the month of February.

The series got off to a rollicking start on Sunday afternoon with an ethnomusicological presentation by New York-based researcher Maxine Gordon, who gave an insightful account of the work of pioneering jazz musicians Chano Pozo and Dizzy Gillespie, intertwined with her own refreshing spin on the ritual rhythms of West Africa and bebop. Gordon, whose names is also associated with the noted Fordham University faculty, further enhanced her presentation by including video clips and audio recordings featuring the master musicians in their element while riffing on their craft.

In the end, audience members came away with not only a fascinating history lesson spanning Cuba, the African Diaspora and the United States but a much deeper understanding of the drum's timeless appeal and its evolution in the grander scheme of things. "The drum is actually the heartbeat of jazz. You hear the rhythms first, and the rest of the accompaniment follows. So if you talk about makes jazz so great then you have to talk about the drum," explained Gordon, whose piece also managed to draw attention to Cuba's role in the proliferation of Afro drumming throughout the hemisphere.

The Havana-born Chano Pozo, she pointed out, played a key role in this regard. "I would say he had a very big cultural significance in terms of the fusion of Afro-Cuban music and religion, and taking it to the rest of the world, especially to New York," Gordon told TALLAWAH, adding that Chano Pozo's impact is still felt today. "Because Cuba has come under the microscope in recent times, people are getting to rediscover his work. There is so much interest in Cuba today, and it's great to see that the culture is getting some of that attention."

Dubbed "Riddim Across the Atlantic: Di Drum in Africa and its Diaspora," the Grounation series (now in its fourth year and put on in observance of Black History and Reggae Month) seeks to, on a larger scale, explore the idea of African retentions and the spread of innovative cultural expressions through the ethos of the African Diaspora. For 2015, the role of the drum takes pride of place. "We invite [our] audiences to contemplate the presentations and performances which provides a rare opportunity to tell the epochal story of the movement of peoples, cultures and philosophies from Africa to the New World," series director Herbie Miller made clear, "and the multicultural assimilations along the way that are endemic to the Black Diasporas through the spirit of the drum."