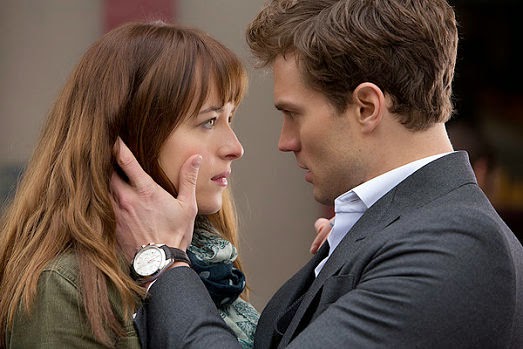 YOU BELONG TO ME: Dakota Johnson (as Anastasia) and Jamie Dornan (as Christian) in a scene from the box-office hit.

While there are aspects of the story, adapted for the screen by Kelly Marcel, that some might find downright disturbing (that Christian Grey needs some Jesus!) and a tad exploitative to others, what we get is, more often that not, an escapist fantasy heavy on seduction and steamy bedroom (and playroom!) action. And at the centre of it all is a bright young ingenue whose sexual awakening comes with a price.

I'm talking about Anastasia Steele (the lovely and talented Dakota Johnson), a mousy college English major who doesn't know what to expect when, filling in for her ailing college roommate Kate (Eloise Mumford), goes to interview the Christian Grey for the college newspaper. Whom she encounters in that spectacular office with a view is a gorgeous man of mystery with dark eyes and quick wit, who just happens to be the world's most eligible billionaire bachelor.

But there's more to Christian Grey than deep pockets, fine suits and a telecomms empire. "I exercise control in all things, Miss Steele," he tells her in his crisp baritone. Fair warning. As Anastasia begins to fall under his powerful spell, over the course of their rapid 'courtship', he takes her from crayons to perfume and opens her up to a world she never knew existed. Before long Ana is a flower in bloom and Christian's deepest, darkest secrets, including his voracious appetites and sexual proclivities, come to light. But can Ana's feeble heart take it all in?

Fans of erotica-on-film staples like Stanley Kubrick's Eyes Wide Shut, Steven Soderbergh's Sex, Lies and Videotape, and Zane's recent page-to-screen feature Addicted will no doubt rejoice at having Fifty Shades to add to the collection, thanks in no small part to its core concepts of sexual liberation, gender, sadism, dominance and submissiveness, and the perpetual clash between good and evil.

I always felt that a movie like the film version of Fifty Shades would be David Fincher territory, presenting another handsome challenge for the celebrated director of such gargantuan successes as Gone Girl, The Social Network and The Girl With the Dragon Tattoo. But Taylor-Johnson has proven that her amazing work on projects like the John Lennon biopic Nowhere Boy was no fluke. Her Fifty Shades pulses with vigour and a brutal honesty that lingers long after the final credits roll.

With no major flaws to phone home about, Fifty Shades of Grey, is a beast, and the director brings just the right amount of ferocity to the material, yielding compelling performances from her attractive leads. For the record, I'm a huge fan of Dakota's (incidentally Vogue's February cover girl) who brings allure and an astonishing vulnerability to her work in the film. She's a terrific foil for Jamie's brooding presence and raw, sinewy masculinity.

In the end, the movie thankfully lives up to the hype. With its intoxicating mix of power, passion and seduction, it leaves you wanting more. Tyrone's Verdict: B+

> MORE MOVIES: Our review of Jennifer Lopez's latest, The Boy Next Door

Email ThisBlogThis!Share to TwitterShare to FacebookShare to Pinterest
Labels: Adaptations, At The Movies, Current Cinema, Flick of the Week, Movie Reviews