WE SHALL OVERCOME: Selma captures the power of a movement, MLK's heroic leadership 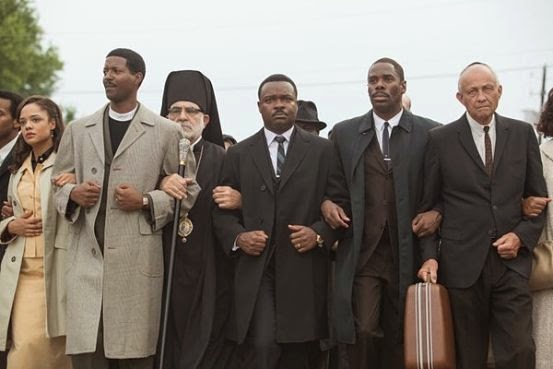 ALL FOR ONE: The historical drama tackles race, Black pride, and the fight for equality.

It's not by chance that Selma opens with Martin Luther King Jr. (David Oyelowo) being honoured with the 1964 Nobel Prize for Peace in Oslo, Norway. It's a proud legacy moment that stands in sharp contrast to the film's more gritty, visceral moments, none more sobering than the horrors of racial segregation and the brutal oppression that underprivileged Black men, women and children had to endure at the height of the Civil Rights movement in America.

As such, what debutante film director Ava DuVernay succeeds in bringing into sharp focus is how MLK's heroic leadership catapulted the movement forward and secured small victories that eventually snowballed into triumphs along the way. In the end, what we witness is an unflinching, well-made motion picture about class, race and the fight for equality.

Anchoring DuVernay's film is an enthralling, robust performance by Oyelowo, who delivers the conviction, confidence and swagger of the iconic preacher-man whose gift for rhetoric could only be matched by his uncanny charisma. "Our lives are not fully lived if we are not willing to die for what we believe in," he advised his supporters and followers as they rallied to get their voices heard. As we all know, he was the living proof.

When sitting president Lyndon Johnson (ample use of Tom Wilkinson) refused to use his clout to help their cause, their yearning for the right to register and vote, King's followers head to Selma, Alabama, for a massive demonstration that took shape as a great march to Montgomery ― 50 miles long, a five-day journey if completed on foot ― to send a message. Things take a turn for the worst though, when they are set upon and savagely beaten by law-enforcers, the images beamed live across the country. Undaunted, the survivors regroup for the next fight, with MLK in tow, displaying inspiring resolve and what a people can achieve when they put their collective minds to it.

Much has been said of Selma being the latest in a long line of Black consciousness pictures that recall the great freedom-fighters ― Malcolm, Mandela ― but what sets Selma apart from the predecessors is its razor-like focus on a singular revolutionary moment in Black history and the iconic figure at the centre. And who has proven more revolutionary in the annals of Black history that Martin Luther King, who speaks truth to power as only he could in Oyelowo's masterful portrayal.

This fine British-born actor may have wowed critic and audiences with noteworthy turns in The Butler and The Paperboy, but it is Selma that should finally put him on the map and get him properly noticed. Like everybody else, we believe his memorable stint in MLK's shoes deserved a run for Best Actor at the recent Academy Awards. And because MLK didn't bring his dream to life all by himself, kudos are in order for the sturdy supporting cast, led by Carmen Ejogo (as the gracious-under-fire Coretta Scott King), Oprah Winfrey, Common, Tessa Thompson, and Cuba Gooding Jr, among several others.

The legacy of Martin Luther King Jr. transcends the Nobel Peace Prize, the special holiday and national monument named in his honour. Like Ghandi, this Atlanta preacher-man and agitator was man of the people who believed in the power of non-violent protest and progress for the Black race. He led by example, inspiring the masses and giving a voice to the voiceless. At its best, Selma is glowing testament to this man's work. Tyrone's Verdict: A-

> MORE MOVIES: Does Fifty Shades of Grey live up to the hype?