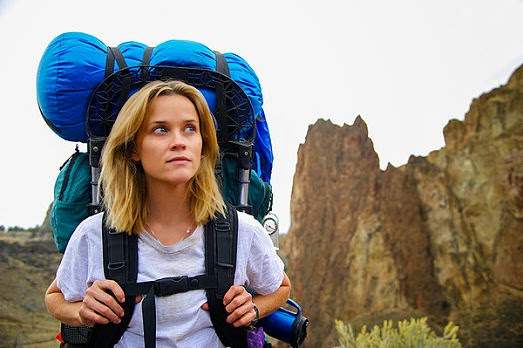 FAR FROM HOME: Witherspoon, as Cheryl Strayed, a woman hiking her way through heartbreak.

"There's a sunrise and a sunset, and you can choose to be there for it." ― Bobbi Grey

"What have I done?" Cheryl Strayed (Reese Witherspoon), the subject of the film Wild, asks herself, as the merciless sun casts a fierce glow across her face. It's a fair question, given that she's just embarked on one of the most punishing missions one could ever imagine ― an 1,100-mile hike across the Pacific Crest Trail through the Mojave Desert with an impossibly heavy backpack in tow.

But Strayed has her reasons for taking on such an arduous, close to three-month-long trek through the wilderness, traversing arid, rocky terrain, even snow-covered landscapes and, in the words of Jimmy Cliff, many rivers to cross. She's grappling with grief over the recent death of her beloved mother Bobbi Grey (memorably portrayed by Laura Dern), the victim of a vicious cancer; the heartbreak that comes with the collapse of a marriage after seven years; an aborted pregnancy and drug-fuelled escapades that sapped her soul and her sanity.

A woman recovering from a downward spiral, Strayed's long walk provides a soul-searching, spirit-cleansing adventure and reconnects her with her passion for the written word (Emily Dickinson and Robert Frost are favourites), quiet reflection, and chronicling her thoughts in a journal.

Based on Strayed's international bestselling memoir of the same name, Wild takes its true-life source material and evocatively transforms it into a touching, occasionally wrenching, compulsively watchable account of re-discovering oneself and the bittersweet feeling of starting over. Artistically speaking, the cinematography is frequently breathtaking, capturing picturesque scenery and other arresting imagery that gives the film much of its visual power.

In the hands of director Jean-Marc Vallée, who finds a terrific ally in screenwriter Jack Hornby, Strayed's story astonishes, inspires and renews your faith in the power of redemption. Similar qualities could be cited to describe the performance rendered by Witherspoon (a co-producer on the film), who is on-screen for the full hour and fifty-five minutes.

It's a magnetic, award-worthy portrayal of a deeply troubled woman that has rightly earned a place among this year's crop of Oscar-nominated Best Actress candidates. Whether she's hitch-hiking to her next stop, screaming into the depths of a ravine, or bonding with family in one of the movie's intimate flashback scenes, Witherspoon's fearlessness consistently shines through. Tyrone's Verdict: A