A PASSAGE TO INDIA: Funny, moving Marigold Hotel is better the second time around 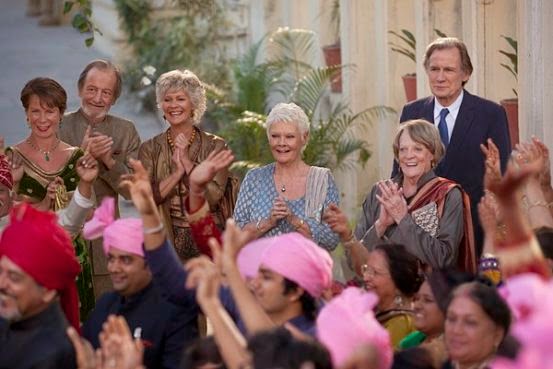 When The Best Exotic Marigold Hotel premiered in cinemas worldwide in 2013, audiences and critics lapped up the movie's droll depiction of British and American expats, retirees of a certain age, living and thriving in their golden years half way around the world - in Jaipur, India, to be exact. The film's postcard-perfect Oriental backdrop and first-rate acting by the likes of Dame Maggie Smith, Dame Judi Dench and Bill Nighy (veterans at their imperious best) made for an enlightening and entertaining cinematic experience and left us wanting more.

Thanks to Fox Searchlight Pictures, director John Madden (Shakespeare in Love) and screenwriter Ol Parker, in this month's The Second Best Marigold Hotel we get a warm reintroduction to these fun old-timers and catch up with their stories and life at the Marigold, where they're all staying, coming and going as they please. Best of all, we find that they are as witty and wise as ever. Muriel Donnelly (Smith), for instance, and the young Sonny (Dev Patel) have been co-proprietors of the hotel for almost a year now and already it's time for the business to expand. They fly up to America to meet with a Cali-based investor (played by the striking David Strathairn) who promised to send an inspector to review the place before he can make the final call.

Weeks later, Sonny suspects that the undercover inspector is their dashing new guest Guy Chambers (Richard Gere), who claims that he's come for the peace and quiet to get started on his first book. Mrs. Donnelly, on the other hand, has her eye on Lavinia (Tasmin Greig), the stoic young woman who just moved in. In the meantime, romantic sparks fly between the reserved Evelyn (Dench), who lands a job sourcing fabrics for an expanding textiles enterprise, and the lonely Douglas (Nighy), who reunites with his daughter but gets blindsided by the estranged wife (Penelope Wilton), who drops a divorce bomb on him in the midst of all the merriment. It's complicated.

In any case, the seniors aren't the only ones grappling with matters of the heart, as the overextended Sonny finds himself competing for the affections of his fiancee Sunaina when an old rival re-enters the picture. Plans for an engagement party, a spectacular wedding and the race to open the doors to the new hotel add to the heady rush and excitement that supplies the film's climax. Will Douglas and Evelyn finally open their hearts to each other? Are Sonny and his Sunaina destined for happily-ever-after?

Patel, who first showed us his leading-man bonafides in the Oscar-winning Slumdog Millionaire, makes for an endearing, believable young businessman as the driven Sonny, the film's emotional centre who gamely rises to face the challenges of running a hotel. "It takes team work to make a dream work," he quips to his Mommy G.

Far from intimidated, Patel holds his own in scenes with heavyweights Smith, Dench, Nighy and Gere, proving that the day is young on his career. But the real star of Marigold Hotel is the movie's breathtaking panoramic setting, full of hypervivid colour, endless vistas and landscapes and astonishingly gorgeous traditional Indian costumes and infrastructure. In a word, exquisite.

At times funny, other times moving, The Second Best Marigold Hotel provides viewers an enjoyable escape to the Orient, and forms yet another jewel in the crown of its prize-winning director. Tyrone's Verdict: B+