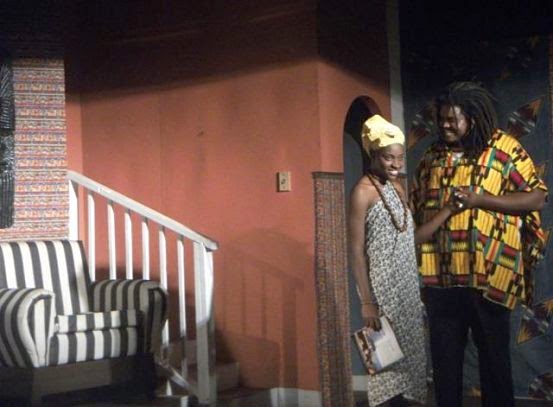 Depending on how you feel about hot-button issues like polygamy and the kinds of roles women were born to play, The Lion and the Jewel might just be your cup of tea ― or you'll be somewhat put off by it. It's a rather polarizing work, to be sure, laden with controversial adult themes. That's why it's such a surprise that it's become a fixture on the current CXC Literature syllabus. But that's another issue for another time.

A Yoruba comedy-drama from the oeuvre of Nigerian Nobel Laureate Wole Soyinka, the play (staged at the Theatre Place this week) revolves around young Sidi (Shanice Sewell), a wide-eyed bush girl who is the most desired belle in the village of Ilunjinle. Small wonder that she becomes the object of passionate obsession for Baruka, a very powerful and primal brute (played with enormous swagger and feral angst by David Crossgil), who is nicknamed the Bale of Ilunjinle.

But there's another man who has his own bulging eyes on Sidi ― the lowly schoolteacher Lakunle (Gabio Campbell), who desperately wants to make her his bride. Trouble is, he has only sweet words with which to woo her, and a girl like Sidi is drawn to power and the promise of a future with financial security.

In any case, Baruka must have her. "It's been five full months since I've had myself a wife," he declares. Never mind that his palace is overrun with servants, including the young women he keeps at his beck and call to cater to him. The leader of the pack is Sadiku (Christina Starz, terrific), the head wife who is no longer the apple of Baruka's eye but obeys his every command nonetheless and sets about netting and 'grooming' Sidi for her master.

But does Sadiku have a hidden agenda of her own for playing along? It matters little, since her boss has made it clear that only a sexy young thing like Sidi can make him feel virile again. How this aging lion pursues his prey, combined with the play's absorbing mix of primal passion, heartbreak, betrayal and family honour, lends the story its fiercely beating heart.

As directed by Kenny Salmon, who adapted the work for the local stage to benefit students sitting the May-June CXC exams, the young energetic actors are not the most expressive, but thankfully they bring a commitment to Soyinka's weighty characterization, challenging dialogue and scene work that belies their age and inexperience.

What's more, Salmon's bare-bones honest approach to the story makes it at once accessible. And, in spite of the unflattering set design and bland lighting, the play's universal message, not to mention Soyinka's deft handling of the delicate and provocative matters inherent in his plot, strike a chord and makes the viewer connect deeply with the story. Tyrone's Verdict: B