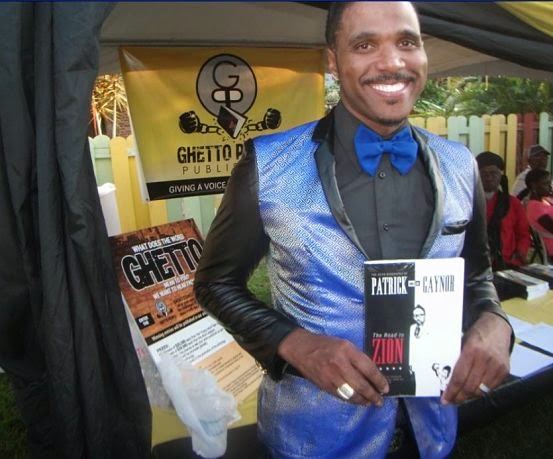 IN HIS OWN WORDS: The entertainer launched his new book on Saturday at the Kingston Book Festival, Devon House.

Patrick 'Curly Lox' Gaynor probably never intended to write the story of his life so early in his journey, but in the aftermath of losing his son, Zion (only six), quite tragically, in 2007, putting pen to paper became almost as essential as breathing. "That was definitely a turning point for me, and it became a situation where I couldn't let all that was happening just be forgotten like that. So I had to start writing things down," reveals the 30-something entertainer, one half of the popular dancehall duo Twin of Twins.

This month sees the release of Road to Zion, Gaynor's straight-from-the-heart autobiography published and released by Ghetto People Publishing, the good folks behind Vybz Kartel's Voice of the Ghetto. "I know my experiences are valuable," Gaynor says, "so one of my objectives with this book is to let people understand that they can rise from whatever it is they are going through and drift more toward reality."

At its core, Road to Zion is a father's heartfelt tribute to his dearly departed little boy ― from birth to untimely death ― but, as the book's dust jacket reveals, the author also offers an exhaustive account of his personal and professional lives, while pulling back the veil on the dark side of the Jamaican dancehall. And with his years of vast experience navigating the inner workings of the industry ― which often manifests in controversial recordings by Twin of Twins ― who better to tell the story?

What's more, Road to Zion continues a sort of "street-lit" renaissance we are currently witnessing in Jamaica, and it is the latest in an ever-growing line of books being produced by dancehall entertainers and popular personalities, in the wake of much-buzzed-about releases by Macka Diamond, D'Angel, Miss Kitty and Omari. It's a much-welcomed publishing trend, no doubt offering a boon to the small-time publishers working feverishly behind the scenes in the hope that these marquee names and their juicy tales of life, love and loss, scandal and seduction, will translate into healthy sales in the marketplace by attracting the stars' legions of fans.

But while Gaynor wants his book to be read and read widely ― without diminishing his street credibility! ― he's not jockeying for bestseller status. Instead, he's more interested in helping someone overcome, using his testimony to help save a life. In other words, Twin of Twins may be a comical, fun-loving duo full of mischief and punchlines, but Road to Zion is no joke. "People have to understand that life is a journey, and you have to learn to recognize what's real from what's an illusion," he advises. "I've learned a lot on this journey, and no matter what setbacks you face, great things happen when you focus on centreing your life."