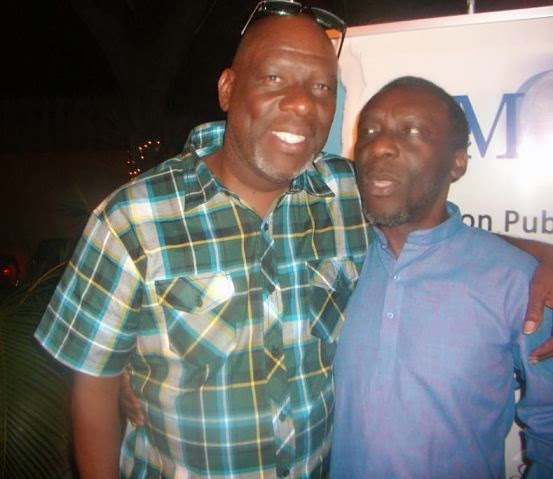 TOGETHER AGAIN: The very definition of double trouble, the ace comedy duo shared the spotlight this week at the Redbones Blues Cafe.

As individuals they have long established themselves and earned renown as consummate comedians who specialize in leaving audiences in stitches. Together, they do serious damage and have become synonymous with each other, like Sonny and Cher, Simon and Garfunkel. Before Ity and Fancy Cat burst onto the Jamaican comedy scene, there was Bello and Blakka, that superduo who've been missing in action for far too long.

During their hiatus, they've been busy tending to family life and building respectable solo careers in the theatre, film and the literary arts. But their fans have been clamouring for them to join forces again, and the cries have not fallen on deaf ears. Thirty years after they first teamed up as students at the Edna Manley College to work a crowd into a frenzy, Bello and Blakka have just announced that a reunion tour is very much in the works and will kick off, hopefully, in April. Venues and tour dates will be confirmed in the coming weeks.

"I am absolutely anxious for us to get back on the stage. It's an exciting thing at the same time because for us it's always been about having good ole fun and making people laugh," says Bell, who adds that though the duo has been on and off, given the demand they plan on working together more often - starting with the tour, which promises to be one of the hottest tickets in town heading into the summer. "I want everyone to support it, because it will be like nothing they've experienced before," Bell promises.

And what exactly can fans expect when they come out to experience this once-in-a-lifetime event? "You know we're gonna give them some of the old stuff, but we have some new stuff lined up that we're gonna give them as well," explains Bell, who has starred in such theatrical hits as Ole Story Time and The Trouble with the Johnsons, as well as TV's Royal Palm Estate. "Some people have never seen [Bello and Blakka] perform together. Some were too young to have seen us back in the day. And some can't wait to see us back on the stage again."

For stars and regular folks alike, the Bello and Blakka reunion tour can't happen soon enough. "Excellent idea. It should have happened years ago," offers actor and director Michael Nicholson. "They were my mentors at [the Edna Manley] drama school. I remember when they just started out, so seeing them team up again is something to look forward to."

Bell and Ellis are turning 55 years old this year, and when they took to the stage at the Redbones Blues Cafe last Tuesday night to greet the crowd at Blakka's Riddims and Riddles book launch, they appeared to be in the best of health and resembled the lifelong friends, talented brothers in sync, we've come to respect and admire. So what makes their chemistry work so well? "We are very respectful of each other. We listen to each other, and we trust each other on the stage," Bell explains. "We are able to be spontaneous, and we even finish each other's sentences some of the time. That's how in-tune we are as a team."

It's been an eventful 30-year journey for Bello and Blakka filled with personal and professional highs and lows. So, in a sense, the upcoming tour represents a coming full circle for the duo. "In acting and comedy if you don't trust the other actor, then it's not gonna work, and Blakka is somebody I trust entirely," Bell admits. "If I had to choose an actor out of a million to work with, it would be Blakka."

Needless to say, Blakka Ellis feels the same way about his partner-in-rhyme. What is he looking forward to the most once the tour starts traipsing across the island? "More laughter," he tells TALLAWAH in his signature lisp. "Comedy is a natural thing for me and Bello, and even though we haven't been together for the entire 30 years, we keep in touch and we're still good friends. We met on the stage all those years ago, and we're heading back to the stage, so it's like a homecoming for us."