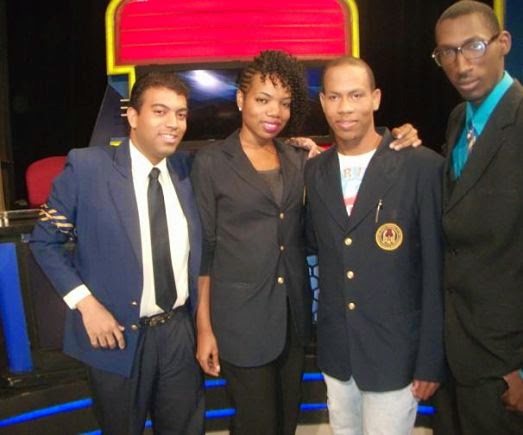 WE ARE FAMILY: The Ardenne-ites (from left) Falconer, Giles, Gordon and Dunn.

The four-member Masters team that represented the Ardenne High family inside the TV J studios on Monday morning didn't lack for motivation as they went up against a St. Jago High quartet, largely because they had come together to pay tribute to their fallen hero Rev. Glen Archer, in whose honour the friendly match was being staged this year. A fun, light atmosphere enveloped the studio once quizmaster Kalando Wilmot got the ball rolling and judges Ave McIntosh and Theresa Easy - and a sizeable audience - took their seats.

Overall, it was a spirited encounter, keenly contested by both sides, but in the end Ardenne's team managed to surge ahead to secure the victory. (You'll have to tune in to TV J later this week to see for yourself and to get the final score.) "This result was very important to us because we came here to win and do our alma mater and Rev. Archer proud," captain Keenan Falconer, who represented Ardenne in Schools' Challenge Quiz from 2012-13, told TALLAWAH. "We were told about the match only three weeks ago, and we had only yesterday to practise as a team, so the preparation was very limited."

Still, despite the odds, Falconer (Ardenne's current SCQ head coach) felt they pulled off a job well done, a performance of which Rev. Archer, a man of notoriously high standards would have approved. "He was a colossus, and his legacy is well-respected by all of us. It's not a minor achievement by any standard," Falconer said. Anthony Williams, who chaperoned the team, heartily concurred. "[Archer] was a stalwart, a man of great educational and inspirational legacy who lived up to our school motto, 'With God as our guide, we seek the best.'"

That's why winning the 2015 SCQ championship would mean the world to not only Falconer and Williams, but the entire Ardenne family and their throngs of supporters. "It would certainly add to the school's profile as the most sought-after secondary institution in Jamaica," observed Williams, a past head boy. On Wednesday of this week, Ardenne (the 2013 champs) will face perennial powerhouses Kingston College in the semi-final round to book a place in the grand finale, set for March 31, against either Campion College or St. Jago High.

"We're looking forward to it, because [KC] beat us last year and we want to settle the score," Falconer noted. But, when all is said and done, winning the title for their dearly departed coach and mentor is perhaps the greatest motivation they'll ever need. "Winning the match on Wednesday and going on to win the finals would be exceptional, and the best possible tribute to him."