I SAY A LITTLE 'PRAYER': Religion and relationships spice up David Tulloch's latest 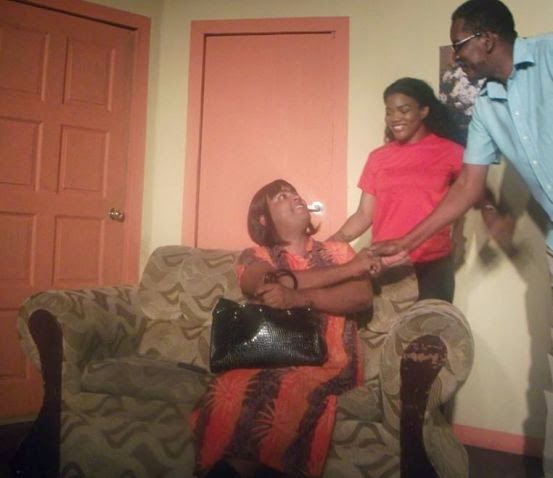 IN THE HOUSE: Tulloch, Wilson and Nicholson get acquainted in this scene.

Of all the relationships Black people find themselves in, there is perhaps none more complex and challenging than the one we share with that Higher Power. Want proof? Look no further than David Tulloch's Prayer Partner, which is currently pulling sizeable crowds to the Green Gables Theatre, on account of its potent blend of spiky humour, domestic conflict, sexuality and spirituality.

Drawing on the talents of a competent group of actors, including Tulloch himself, the play is at once a well-written, insightful and hugely enjoyable dramedy that everyone must see, as it sparks a timely dialogue about modern religion, Christianity in particular, and its unavoidable impact on everyday human relationships.

We are introduced to Abe (Michael Nicholson) and Danielle Jackson (Shana Wilson), a close-knit father-daughter duo whose bond faces its toughest challenge yet when two men vie for Danielle's affections. In short, heartbreak and pandemonium ensues. Channelling his inner rudeboi, Chris McFarlane plays footballer Giovanni, Danielle's main squeeze, while Tulloch must have found inspiration in Screech from Saved By The Bell for his nerdalicious Peter, a returning resident distinguished by a dorky laugh, a pair of specs and high-waisted trousers.

At the play's most heated, the Jackson living room is practically transformed into a fight club, with one man's wounded pride pitted against another's fragile ego. A heartbroken girl caught in the thick, with her dad kept busy playing referee. Things get pretty intense. But thankfully soul and sanity arrives for poor Danielle in the form of Peter-Gaye, a mysterious prayer partner sent from a Mandeville-based ministry, who subsequently moves in with the family to help turn things around. You might see traces of Robin Williams in Mrs. Doubtfire.

Throw into the mix, meantime, the effusive Sister Grace (Suzette Barrett), another prayer partner who shows up on the Jacksons' doorstep, armed with her robotic text messages from the Holy Spirit and a no-nonsense approach - and you get a full house where there's never a dull moment.

Although all five actors give solid accounts of themselves, there's something to be said of Tulloch's versatility that kicks things up a notch, especially when one considers that he wrote and directed the whole thing, while playing one of the most pivotal roles in the show.

Technically, the set design and lighting fall flat, but the tunes coursing through the speakers in between scenes pulse with tremendous emotion and vigour. And that's perhaps an apt description of the play overall, because Prayer Partner is by no means a flawless work, but it's brought to the stage with admirable ambition and yields results that will thrill, amuse and challenge you. Tyrone's Verdict: B+