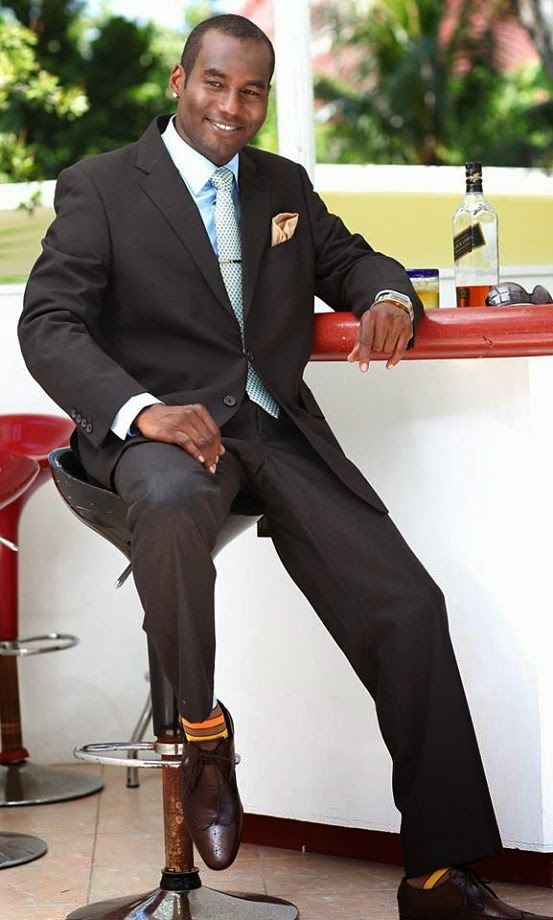 ROYAL SEAT: "When you're shining bright, the spotlight finds you," Harris reflects.

Neatly arranged near the top left hand corner of K. Sean Harris' work desk is a stack of about seven novels, his own creations, boasting such titles as The Stud, Merchants of Death, Redemption and The Snake Charmer. That's only a handful of the books Harris has penned and published over the course of his decade-long writing career, consequently winning a legion of fans who can't get enough of his combustible mix of sex, relationship drama, harsh socio-economic realities and the scourge of crime across Jamaica.

A long-serving managing editor at LMH Publishing, who publishes his work under his own imprint Book Fetish, the Kingston native prides himself on the eclectic number of genres he's tackled and his prolific output ― at least two books a year, thank you very much. The keenly observant and immensely private scribe (he won't even reveal his age!) is gearing up to publish his 20th book, a wide-ranging story collection titled The Flying Ostrich, due out in May, while basking in the buzz that his most recent release, Queen of the Damned 2, is generating at home and abroad.

Last week, TALLAWAH called on this stalwart storyteller at his office at LMH to talk about his burgeoning literary career, why he shuns the spotlight, and his message for those who say reading is boring.

TALLAWAH: As a relentlessly productive Jamaican author you've published more than a dozen novels, including a number of sequels, yet your fans and the wider public knows hardly anything about you. Is that deliberate?
Harris: I don't put myself out there; that's just me. And I won't change that approach just because I've reached a certain level of success. I want to be able to look back and say I did it my way. I just do the writing, get the book published and let the work do its job.

TALLAWAH: So you're not one who craves the spotlight?
Harris: I'm more of a reserved person, and again I just don't see the need. The work will speak for itself. And I trust the rhythm of the universe. When you're shining bright the spotlight finds you; you don't have to seek it out.

TALLAWAH: Who are some the authors who pulled you into the literary world as young writer still puzzling out your voice?
Harris: I've been an avid reader since I was about six. And as I got older, the kids I knew were reading the Hardy Boys and Nancy Drew books. But I was more into books by Sidney Sheldon and Robert Ludlum. I never planned to write, so I wouldn't say I have any major influences. About ten years ago, I wanted to publish a collection of erotic Jamaican stories, but the person who was supposed to do the writing couldn't deliver, so I ended up writing the book myself. And I've been writing ever since.

TALLAWAH: And now here you are, 19 books later. How do you define yourself as a storyteller?
Harris: Life is my muse. I like to tackle real-life issues I find other writers are afraid to write about, especially sex. When I'm writing I don't censor myself. I'll go in depth. I like to create organically. I don't write with the audience in mind. I just tell the story.

TALLAWAH: Through your managerial job at LMH, you have the clout to take a person's work from edited manuscript to published hard copy. As an editor, what are you usually looking for?
Harris: First and foremost, you're looking for a good book, something that's well-written, relevant and complements our catalogue. As you know we are known for books that are mainly based in Jamaica, but we want the kinds of stories that can be exported abroad. Show the world that we can compete with anybody in terms of talent and quality.

TALLAWAH: What are you currently reading?
Harris: I won't call any names, but I'm reading a lot of esoteric material at the moment. It's what I'm drawn to right now, but I have my next fiction book lined up: The Goldfinch by Donna Tartt.

TALLAWAH: If you were to toot your own horn for a bit, what would you say has got so many readers hooked on K. Sean Harris?
Harris: I would say my storytelling ability is top-of-the-line. I have the utmost respect for my abilities. The consensus is that when you pick up one of my books, you better have time on your hands and a comfortable seat because you're gonna be there for a while. You have those people who say reading is boring. Well, they're definitely reading the wrong books.

> For more on K. Sean Harris and his body of work, visit kseanharris.com.