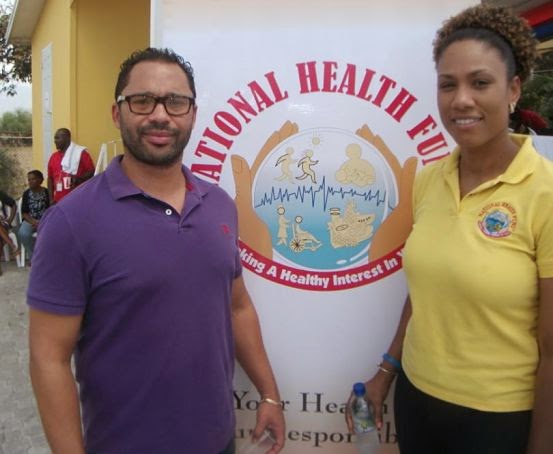 NO SMOKING: Alexis, with the National Health Fund's Rosemarie Stewart, attending the NHF Wellness Festival at the Police Officers' Club on Saturday.

One of the most keenly debated news stories to come along in recent months, the fires at the Riverton City Landfill ― and the resulting smoke nuisance across the capital ― has for the past several days drawn strong reactions from the political boardroom to the corner barbershop, while bringing into sharp focus the shortcomings hampering the island's waste-management system. Here, TALLAWAH captures a few of the critical voices weighing in on the crisis and its implications for the country's future.

"We urge the relevant agencies to increase public education and safety in regard to proper waste disposal and the dangers of smoke inhalation. Communities in the immediate vicinity of the disposal site should be focused on as soon as possible. We hope that the Cabinet of Jamaica will be definitive and implement the necessary measures to permanently address the clear public-health risks that the Riverton landfill continues to pose." ― President of the Medical Association of Jamaica (MAJ), Dr. Shane Alexis, in a release sent to the press on Monday
**

"We can safely say that the fire is contained and we are in a better position than we were last week. We are confident that as long as the resources there today remain operable, we will extinguish [the fire] by the weekend." ― Commissioner of the Jamaica Fire Brigade, Earl Mowatt, waxing optimistic about things returning to normal
**

"The disaster has provided an opportunity for us to really look at how we can improve risk management across the board ― at the national, corporate, community and individual levels. This situation is not new, and I believe the disruption that it has caused could have been averted." ― JPS President and CEO, Kelly Tomblin, adding her voice to the debate
**

"An educational campaign needs to be initiated immediately on the proper handling of solid waste in the country, from the sorting to collection and treatment. These matters are of national importance, and we are going to appeal to the Government to ensure that they are followed through." ― President of the Private Sector Organization of Jamaica (PSOJ), William Mahfood, speaking out on the issue
**

"I do not accept that I am incompetent or out of my reach. I accept the fact that I am managing a disposal site that is 55 years old, that needs a lot of resources to bring it to a certain standard. However those resources have not been forthcoming due to challenges. I believe that we have done exceptionally well in keeping even the regular garbage collection going to the site and disposing of it in the way that we have been able to. If it weren't for some of those creative mechanisms, I believe there could have been greater danger." ― Jennifer Edwards, executive director of the National Solid Waste Management Authority (NSWMA), rubbishing claims that she is to be blamed for the fires at Riverton