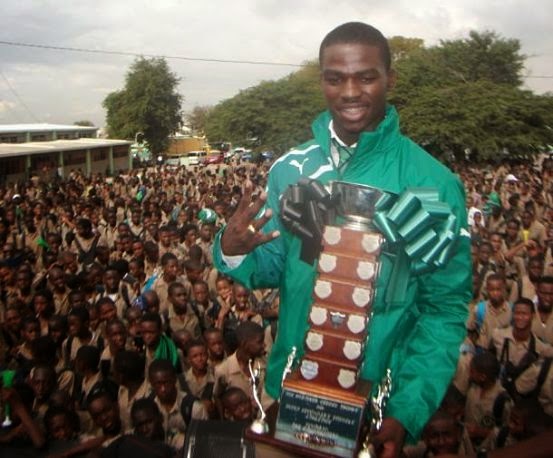 VIEW FROM THE TOP: O'Hara, posing with the Mortimer Geddes Trophy at Calabar High on Monday.

Blessed with astonishing speed and vitality, he copped four gold medals for eventual champions Calabar High at Boys' Champs on the weekend - making him, next to Wolmer's star boy Jaheel Hyde, the most outstanding male athlete to grace the track at the championships this year. Michael O'Hara is a name Jamaica had better get used to.

His self-confidence on the field of play and his regal air off it can't be missed and, in a nutshell, he possesses what we call the spirit indomitable. Where does his come from? "It comes from my mother [Kereen Williams]; I take everything off her," reveals the teen phenom and team captain, who is just two years shy of his 20th birthday. "My dad [Sidney] inspire me a lot, but my mom is mostly responsible for me becoming who I am today."

We are catching up at Monday's thanksgiving-themed morning devotion at the Red Hills Road-based school, where moments earlier he addressed the jubilant school crowd, a sea of white and khaki, to deafening cheers. A hero's welcome home. Later telling us about his successful captaincy of the squad, being leader of the Calabar Lions, he admits, "It's rough. To get a group of boys to stay focused and get quality results is difficult. But I'd watched the other captains in previous years, and I kinda worked off what I saw them do, and I think that made us a much better team."

Everyone from principal Albert Corcho to board chairman Rev. Karl Johnson to his teammmates sing Michael's praises, drawing attention to his charisma and innate leadership abilities. "Michael is an excellent student. He gets a lot of respect and he's also very respectful," Principal Corcho tells TALLAWAH. "And he does well academically. He's doing three CAPE units at the moment, and we expect him to pass all of them. The challenge for us now is balancing his athleic talent and the academics."

When it comes to his bright future, for Michael (who specializes in the sprint double, as well as the sprint hurdles and 4X100M relay) the possibilities are endless. "I am going after opportunities that I know will make me a better athlete and a better man," he says. "There is always room for improvement."

> > MICHAEL'S PICKS: Getting to know the star sprinter

Favourite reggae and dancehall artistes: Popcaan and Kartel, of course.

Three things he can't live without: My mother, father and cellphone

The book he couldn't put down: Fifty Shades of Grey was a very interesting book. No details necessary. That's all I'm saying. (Laughs).

Quality he likes most in friends: Being supportive and keeping me on the right track, no matter what.

Life after Calabar: I have UWI in mind, but we haven't decided what's going to happen. But I'm definitely not leaving Jamaica.