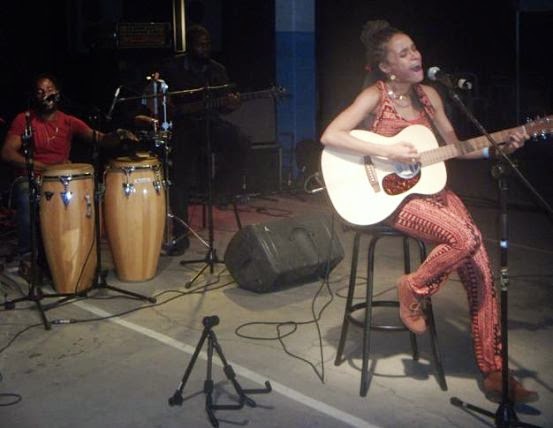 RAISING HER VOICE:Songstress Kelissa was among the musical acts who thrilled the large crowd

It's not very often that you see reggae's megawatt stars trying to blend in with us regular folk, enjoying a quiet change of pace for a change. Chronixx tried in vain to do just that at Saturday's well-attended Earth Hour concert at the Ranny Williams Entertainment Centre, supplying background vocals for his sistren Kelissa and joining younger bro Keznamdi to perform a spirited duet that won over the crowd and brought his fans scurrying to the front of the stage with phones and cameras in tow. Afterward, he joined the corps of backing musicians seated on stage.

But, in the end, the events universal significance outweighed the hefty star power that it attracted from the music fraternity. A global observance in respectful tribute to Mother Earth, Earth Hour was sparking a musical celebration in Jamaica for the third consecutive year, thanks in large part to the determination of the Jamaicansmusic.com team, in partnership with brands like the Jamaica Tourist Board, the Gleaner Online, and the Nuh Dutty Up Jamaica campaign.

Chronixx's surprise appearance aside, the main highlight of the near three-hour concert was the lighting and ascension of about 100 white lanterns (starting promptly at 8:30pm) that lit up the night sky overhead. With all the venue's lights extinguished, patrons whipped out their smartphones, video cameras, Ipads and tablets to capture the visceral moment, making for a thoroughly modern celebration.

But it was a concert after all, so the live show resumed in earnest afterward, featuring the crowd-pleasing stylings of Nesbeth, Mario Evon, BlackAsCole, and several others. Music and message laced together in pitch-perfect harmony.

Earth Hour is undoubtedly one of those singular annual events where you truly sense that, as citizens of the world, we are showing some regard for the place we all call home.