SERIOUS BUSINESS: Basil Dawkins' Hot Spot makes the leap from the stage to the page 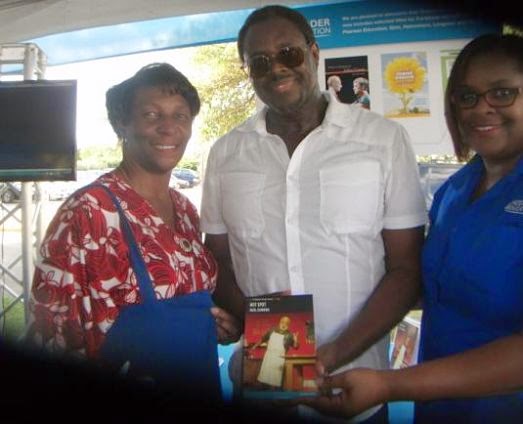 When Hot Spot debuted in 2005 at the Little Little Theatre, with an accomplished cast including Marguerite Newland, Volier Johnson, Zandriann Maye and the late great Charles Hyatt Sr., it struck a nerve with audiences who saw much of themselves reflected in the show's relatable characters and connected with its droll storyline centred on a close-knit family determined to keep their culinary business afloat. Fast-forward ten years later, and the Basil Dawkins hit play is poised to connect with a new audience and a new generation, thanks to the arrival of the play's book version that's just been released by Hodder Education Publishers. Can a film or television adaptation be far behind? TALLAWAH joined the playwright, the publishers and a handful of well-wishers for its soft launch at the Kingston Book Festival's book fair on Saturday at Devon House, where Dawkins told us about the play's 'golden' genesis and what's next for him.

TALLAWAH: Hot Spot has had quite a journey from manuscript to commercial stage production, and now it's a bookshelf newcomer with potential bestseller written all over it. That doesn't happen often in Jamaica.
Basil Dawkins: It's a blessing. This is actually the play in its entirety, in its original manuscript form before it was edited down for the stage production. So it's much longer than most people will remember. Overall it's an achievement I'm proud of, being selected by Pearson (now Hodder Education) to publish with them.

TALLAWAH: What sets Hot Spot apart from everything else you've ever written?
B.D.: The main thing is that it won a gold medal in the JCDC Literary Arts competition, and it was a long time that a play had won a gold. For me that's what makes it special.

TALLAWAH: Do you get to read a lot of plays and assess the work of different playwrights?
B.D.: I do read plays from time to time, but they are mostly scripts from people, young writers especially, who want me to read their work to see if it is commercially viable.

TALLAWAH: This being your first time at the Kingston Book Festival, what do you make of what the festival has achieved over the four years?
B.D.: I think it is a good start. But it deserves more support and funding. [The festival] must get bigger; we're to see buses driving in with school-children from all over the island. And I think it must become a touring festival that goes to all the parishes.

TALLAWAH: What are you working on now?
B.D.: Well, I'm still recovering from Divorce Papers, which is still in production. We're now getting ready for the overseas tour coming up, and it seems to be an extensive tour, so we are getting physically and mentally ready for that.