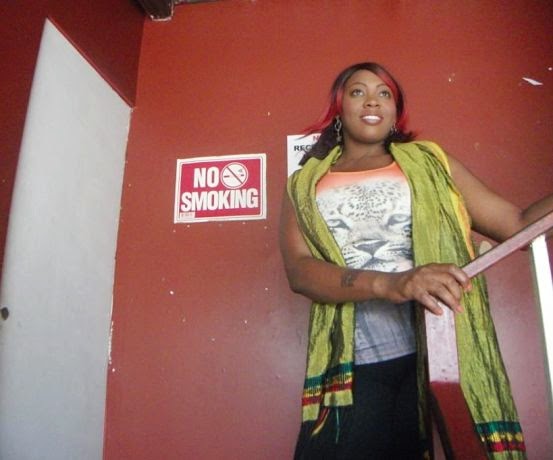 POISED TO SOAR: "I have no limits when it comes to acting," shares the up-and-comer, who has done TV, theatre and film.

The first thing you want to ask is if Christina Starz is in fact her real name. For the record, it's not. Just like Whoopi, Gaga and L.A. Lewis, it's a nome de stage adopted by the thirty-something actress who, from as far back as she can remember, has always had ambition in her heart and major-league stardom on her mind.

"From I was in primary school I've been writing my own skits and performing in shows at church," shares Christina, who grew up in Montego Bay, completing studies at Mount Alvernia High before moving on to Kenilworth HEART Academy in neighbouring Hanover and a stint in the Turks & Caicos Islands. "I aspired to learn everything I could about acting, so I would watch a lot of movies and study what the actors did."

Years later, Christina's strategy is paying off and she's steadily reaping the fruits, landing roles in everything from small films (Jollywood's Cane and Abel, Protecting Harris) to television (Royal Palm Estate) to commercial theatre (When the Cat's Away, the Thespy-nominated Laff It Off, which she sums up as one of the best experiences of her life.)

Unsurprisingly, doing mainstream theatre has presented a steep learning curve for the actress who faced the toughest (and most thrilling) transformation challenge of her burgeoning career when she landed the plum role of headstrong first wife Sudika in Kenny Salmon's version of Nigerian luminary Wole Soyinka's The Lion and the Jewel, playing this week for a limited engagement at New Kingston's Theatre Place.

"Taking on a character like [Sadiku] is a joy because you get to escape into another culture and become somebody that is nothing like you," she says of doing the play, a Yoruba comedy-drama exploring family, honour and polygamy. "I'm a fan of African shows and I love different dialects. I've always wanted to do speak Nigerian so that helped me in preparing. I always go back to the movies whenever I'm trying to get something right." Trust us, she gets it right, nailing Sadiku's nurturing traits as well as her vindictive tendencies. She even wrote a couple of the songs that are performed in the production.

For Christina, who appeared as Sonny T's nurse on Royal Palm and will next costar in the ensemble comedy Bashy Big Yard, there is no limit to what she hopes to achieve in the years to come, as she sets her sight on finely honing her craft and raising her game on her journey to the top.

"I see myself doing more movies and embracing the broader spectrum of theatre," says Christina, who is simultaneously getting her feet wet in the beauty biz with an all-natural total-body line of products, Crave Me, which she launched with a friend in December. "I don't see myself dimming at any point in my life," she predicts, waxing lyrical about her future. "I feel like no one can dim my light." And since you must know, Marshaire Rose was her given name at birth.