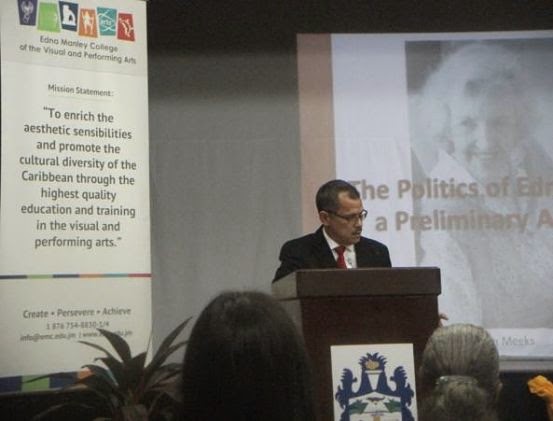 TALKING LEGACY: Meeks, making his presentation on Tuesday at the Vera Moodie Hall.

Edna Swithenbank Manley, widely regarded as the Mother of Jamaican art, never officially entered the realm of Jamaican politics, but she had a profound grasp of the dynamics and nuances that governed Jamaican and regional politics, which she rigorously explored in much of her work as an artist, mesmerizing and influencing many, including a couple of the men in her family who happened to be noted politicians. That was just one of the eye-opening points raised by Prof. Brian Meeks as he presented the 2015 Edna Manley Memorial Lecture on Tuesday evening at the Vera Moodie Hall, Edna Manley College.

"I think she had an extraordinary impact on the politics of both Norman and Michael, and it's an influence I believe has been underestimated and underappreciated," Prof. Meeks, who specializes in Social and Political Change at UWI, told TALLAWAH following his nearly 50-minute presentation titled "The Politics of Edna Manley: A Preliminary Approach. "Her influence didn't manifest through preaching or teaching per se, but through her work and the striking images that she produced."

Tracing the artist's eventful life from her youth in England to her remarkable life and work in Jamaica, the Edna that Meeks recalled had layers that screamed radical, revolutionary and seer whose mystique was only heightened by her spirit of compromise, perhaps the most important part of her legacy. So, in speaking to Edna's "politics", it was virtually impossible for Meeks to sidestep her intellectual and artistic evolution and emergence as a leader of the Jamaican art movement, and her staunch advocacy when it came to matters of gender and the role and rights of women.

"Her passions were clearly a brew of a rebellious and forthright personality influenced by early feminism and gradual social change," Meeks said, drawing attention, too, to her most celebrated works like 'Negro Aroused' ("a proclamation of Black pride"), 'Brother Man', and 'Horse of the Morning,' which she famously dedicated to her beloved Norman.

"There's a nationalism that runs through her work," Meeks later told the gathering that included members of the Edna Manley Foundation, Prof. Kenneth Hall and Lady Rheima Hall. "A spiritualism tinged with agnosticism and a healthy respect for signs and symbols." 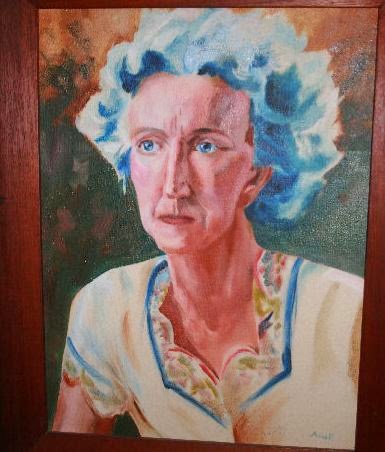 In the end, Edna Manley emerged as a full and complex woman whose gargantuan appetites for art and life put her in a class by herself. "This is a work-in-progress," Meeks eventually admitted, referring to the scope and breadth of his research on the late artist, "only scratching the surface of [Edna's] contributions and what she stood for. I think she made solid contributions to the political foundation of modern Jamaica and had an overwhelming commitment to her chosen island home."

For EMC principal Dr. Nicholeen DeGrasse-Johnson, Edna Manley was a singular sensation who revolutionized the Jamaican art world with her presence and oeuvre. "The history of Jamaican art is synonymous with Edna Manley," she noted, "as teacher, patron and, some would say, rebel."

The 2015 Edna Manley memorial Lecture wonderfully coincided with the opening of the exhibition "Edna Manley: Into the Sun," hosted by the school's CAG(e) Galley. On view through March 14, the wide-ranging display includes works by the late artist that are currently on loan from private collections - and curated by David Boxer and Petrina Dacres.

The lecture, which as been given in past years by the likes of Barbara Gloudon and the late Wayne Brown, is put on by the Edna Manley Foundation, whose primary objective is to honour and perpetuate the work and memory of the late Edna Manley and to reflect her concerns in various aspects of national life.

"[Her political] influence, I believe, has been underestimated and underappreciated." - Prof. Meeks