WATCH THE THRONE: School of Drama's Oedipus offers a solid take on a stage classic 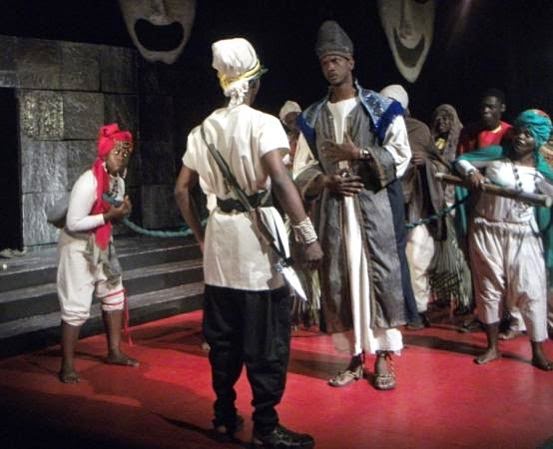 MEN OF VALOUR: Roye (as The King) and Burke (as Creon) settle their differences.

As far as classic stage tragedies go, if William Shakespeare's Hamlet has any deserving equal it's Oedipus the King by Sophocles, a wrenching Greek masterpiece that's as relevant today as it was back in the BC era. It gets a fresh, strongly acted and visually stunning interpretation at the School of Drama this month, thanks to the brilliance of visionary director Robert 'Bobby' Clarke and a fine cast of student actors who bring the complex work to life with palpable gusto and rousingly fierce performances.

It's by no means a flawless show, however; the production team takes a few creative liberties with aspects of the original source material and it's a tad too long. But the production is, in all fairness, a success ― beautifully lit, the costumes are gorgeously designed, and the whole thing is anchored by a highly commendable lead turn by Damornay Roye as the titular ruler who must face the inconvenient truth that absolute power corrupts absolutely. Uneasy lies the head that wears a crown.

The story is set in the city of Thebes, a land plagued by disease and a raft of social ills. The people look to the king for answers but he has problems of his own, caught up as he is dodging plots of treachery, ironing out family issues, and coming to terms with his destiny and his mortality. We watch, riveted, as Oedipus clashes with his strong-willed brother-in-law Creon (a solid DuVaughn Burke), square off against a blind prophetess (Joylene Alexander, terrific) and rattle his high-strung wife (Imaresha Smith-Cooke). And, like Hamlet, he's practically driven mad by the overwhelming circumstances.

Laden with eloquent speeches and moments that are deeply moving, both Hamlet and Oedipus keenly observe their respective creators' clear fascination with the doings of rich, regal, powerful men and the mistrust, disloyalty and thirst for revenge that pushes them to the edge. As both works climax, the actions of their heroes bear dire consequences and lead to unspeakable tragedy.

It's tricky adapting such a magna opus for today's audiences, but Clarke, a veteran director with the LTM National Pantomime, has proven he's game for (almost) anything. His ambitious take on Sophocles' vision has it hiccups, but as a whole it's nothing short of enlightening and full of visual interest. Tyrone's Verdict: B+