GIRL TO WATCH: Actress-singer Shana Wilson on her musical pedigree and living her dream 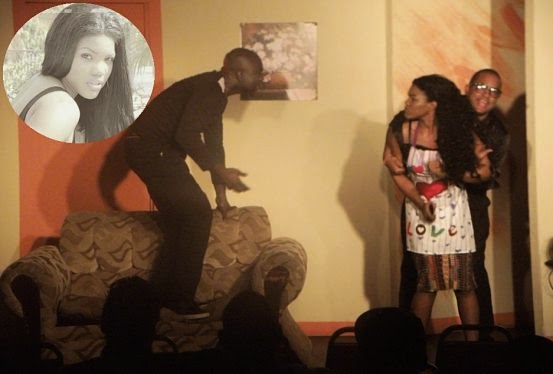 THE FAMILY THAT PREYS: Wilson (centre) and castmates sharing one of Prayer Partner's intense moments.

When Shana Wilson talks about her father, the late lover's rock icon Delroy Wilson, the pride in her voice is unmistakable, but you also sense the slightest whiff of sadness. "He died when I was about six or seven, so I didn't have a real father-daughter relationship with him. He was away most of the time," she recalls. "Mom said he used to drink a lot, and that's where I get (my drinking) from." She chuckles at the memory. But she gets serious again when reflecting on Mr. Wilson's vast musical legacy. "People who worked with him said he was very, very dedicated man. And I think everyone agrees the recognition he deserved for his work in the music. But we'll always be proud of him."

No doubt Wilson, were he alive today, would offer up similar sentiments in praise of his kid who, at 26, has steadily started making a name for herself as a blossoming stage actress and a second-generation songstress who specializes in vintage grooves and covers of her late father's classic cuts like "Stick By Me" and "Better Mus' Come." "Music will always be on the table," she promises.

An alumna of Meadowbrook High and St. Hugh's High, the ingenue already has three solid stage credits under her belt, namely Risque, Sins of the Flesh and the still-playing Prayer Partner. As the female lead in Prayer Partner, Wilson rules the roost as Danielle Jackson, the apple of her father's eye and the prize for which two longtime friends are competing. "I'm used to playing the sexy kitten, so this kind of role was new to me. She's very bossy; she gets what she wants, and I'm not usually that type," confesses Wilson, the middles child of her father's five kids, who has done music studies at the Edna Manley College's School of Music.

Whether she's riffing on the bliss that comes with collaborating with actors the ilk of Chris McFarlane and Michael Nicholson ("You're never bored."), handling the opposite sex ("Men can be so dramatic!") or the possibility of one day tying the knot ("I'm open to the idea."), in person Wilson comes off as exactly what you'd expect of an on-the-come-up talent who is clearly destined for stardom.

"I became an actress because I really like the idea of transforming into somebody else, somebody who is totally different from who I am as a person. And that's what I see myself doing for years to come," says the Waterhouse native, who does theatre and live music full time ― and has just completed a novel she hopes to get edited and published sometime this year. According to Shana, she has set no ceiling on her goals for the future. "I want to win my first Actor Boy award, and I want to do Jamaican movies," she tells TALLAWAH. "The bigger the better."

>> SHANA'S Top 5 PICKS: Get to know the rising star

> Most fun way to work out: Dancing to Latin music

> Best advice ever received: "God did not give us a spirit of fear but of courage and a sound mind."