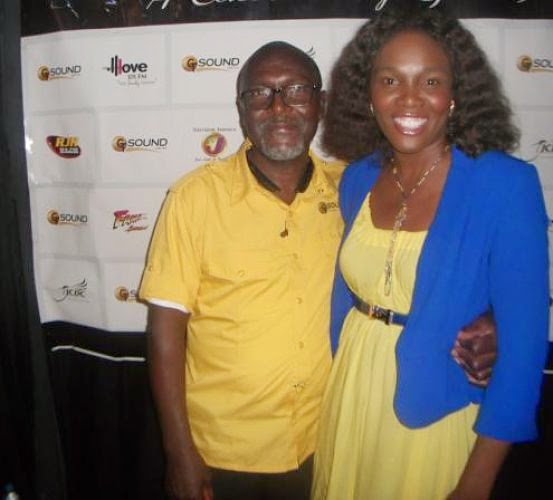 LEADING LIGHTS: Regal songstress Judith Gayle and the man himself, Geoffrey 'GT' Thomas, who blew out 60 candles on Saturday, share a moment.

Who said foot-stompin', rag-waving gospel music has gone out of style? Not the hundreds of patrons who turned up at the Ranny Williams Entertainment Centre on Saturday night to make a joyful noise at Testimony 2, a sizzling praise party that earns mighty kudos for its outstanding production design, crisp sound and lighting (courtesy of show producers GT Sounds) and a brassy lineup featuring some of the most pyrotechnic talents in contemporary reggae gospel, who delivered and then some.

It's always the relative newcomers and on-the-come-up acts who grace the early segment of these shows, granted their bit of shining time on the big stage to warm up the place. The likes of Vennica Nicholson, the On the Shout band, and the multi-denomination aggregation Perpetual Sounds of Praise certainly put the opportunity to effective use, connecting with the crowd with their unique blend of praise-and-worship sing-a-long and riveting God-works-in-mysterious-ways testimony. Perpetual Sounds' Nadine Blair gave a particularly memorable testimony, drawing parallels to the Moses story in explaining how she came to pen and arrange "I'll God," a rapturous anthem performed to soul-stirring effect.

It was a big night, too, for bands. While On the Shout (working with the incredibly talented young vocalist Dwayne Murphy) rocked the house with tunes like "Fight" and "Start Ah Fire", Katalys displayed deft musicality, performing "You Can Dance" and "Peer Pressure" among other crowd-pleasers. But nothing could prepare us for the dazzling acapella acrobatics of Humble, a very in-sync six-member group of tenors and baritones who made light work of classics like Sister Scully's "Hurry Up", "I Wanna Hear the Story" and "I've Got Jesus". To say they whipped the patrons into a tizzy with the sheer power of their harmonies would be an understatement. Their name, by the way, means Hearts United, Minds Bonded in Love for Eternity.

Reggae gospel prince Omari also fared well with the crowd that swelled as the night wore on. Sporting a long-sleeved striped shirt, jeans, sneakers and a pair of specs, the singjay (whose next solo album, Royalty, drops early next year) dipped into his catalogue for "Why" and "Help", later exhorting the power of prayer with "Life over death' and "Imagine Me".

The powerful ministry of Jabez and later on Jermaine Edwards, who wowed alongside his backing group I-Worship ("Fight", "I Can Do All Things", splendid "He's All Over Me") couldn't have set the tone any more fittingly for the ever-magnetic Kevin Downswell and Judith Gayle, the reigning king and queen of the gospel scene.