HOW TO WIN 'CHAMPS': Blending talent and dedicated team effort does it for C'bar 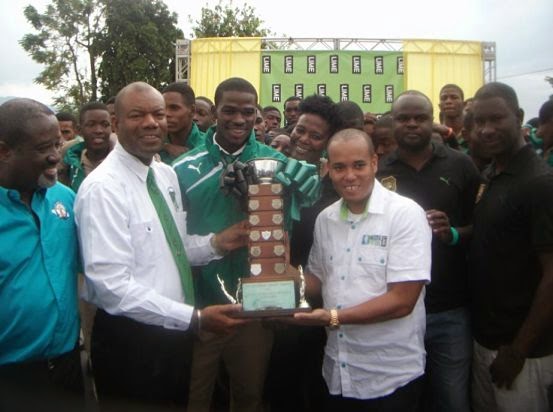 A MOMENT LIKE THIS: Rev. Karl Johnson, Principal Albert Corcho, Michael O'Hara and LIME's Carlo Redwood posing with the championship trophy at the school on Monday.

"Ever so powerful! Ever so strong!" That booming refrain echoed across the campus of Calabar High on Monday morning as students, faculty and administrators gathered out in the yard to celebrate their fourth consecutive year returning home triumphant from Boys' Champs - the dazzling and highly coveted Mortimer Geddes Trophy, that intimidating symbol of schoolboy athletics supremacy, prominently propped on stage for all to see.

It was also a moment of deep reflection, with principal Albert Corcho, board chairman Rev. Karl Johnson and captain of the Calabar Lions Michael O'Hara (who led the victors onstage to deafening cheers and the blazing of vuvuzelas) leading the charge.

After all, the singular feat of outperfoming all the others high schools from across the island to emerge king of the hill ― and to do it four times in a row ― can only be the result of strategy, honing talent and the pooling of resources coming together in a lethal combination. And when you savour the fruits of that labour, the sweet taste of victory, you can never get enough. Principal Corcho knows that feeling. "We want to use this medium to send a strong message to the other schools that when it comes to Boys' Champs, this trophy, the Mortimer Geddes Trophy, will live and stay at Calabar High," he declared to rapturous cheers from the sea of khaki-clad junior students, white-shirted seniors and teachers. "Calabar will remain boys' champions for a very long time."

As one can imagine, it's been a long and arduous road to this point. But, as Rev. Johnson reminded everyone, C'bar is no stranger to four-peats at Champs. As the record books will show, they did it from 1930-33, and he always knew it would happen again. "We said it. We knew that our generation had what it takes to match that feat, and this team will go down in history as the team that matched it," Johnson noted. According to the chairman, a dynasty is in the making. "The mission is not yet complete. The aim now is to win five in a row. We have to set the bar at a new level," he emphasized. "We do not make careless promises and idle threats. Come next year, barring any unforeseen circumstances [the other schools] are going to feel the full force of the lions."

More than in any previous year, Calabar triumphed at Boys' Champs 2015, amassing 280 points, simply because everyone involved pulled their weight, redefining the power of team effort. On Monday, speaker after speaker made a point of lauding the contributors. One person mentioned the dedicated old boys who responded to the call with alacrity and rallied strong support. Another cited the involvement of sponsors Puma. Yet another gave props to the power of prayer at Camp House.

But, by far, the biggest big-up was reserved for coach Michael Clarke for his sterling work when it came to technical expertise and whipping the boys into shape. "We have the greatest high school [track] coach in Jamaica today," Rev. Johnson boasted. "He is simply a track-and-field genius, and I thank him and I thank God for him and those who work with him. A huge part of our success is in the coaching and management of the team."

And what a dream team it is. A 50-odd member mix of gifted and committed junior and senior athletes who are reminded every day that only their best is good enough. "These are our brand ambassadors. They are the ones who went out there and put their bodies on the line," Johnson said admiringly. And Principal Corcho couldn't agree more. "This is a set of individuals," he remarked, "who have dedicated their lives to the development of Calabar High."