IN COLD BLOOD: Child 44 plays up the intrigue, riveting suspense 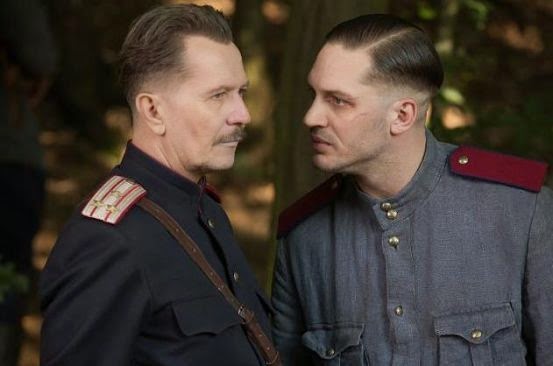 HEAT AND DUST: Gary Oldman (as Nesterov) and Tom Hardy (as Leo) in a tense moment.

A strongly acted and wrenching crime drama, based on the novel of the same name by Tom Rob Smith, Child 44 weaves a tangled web centred on a series of connected child murders that grips Moscow in the wake of World War II. As directed by Daniel Espinosa, it carries us into a world of KGB agents, expedient executions for treason, and fractured family lives.

Leo Demidov (Tom Hardy), a hero for the Soviets and a highly respected man of the law finds himself knee-deep in the investigation stemming from the brutal slayings of the kidnapped young boys, all between the ages of nine and 14, their nude bodies discovered by the train tracks and in the woods severely mutilated. With the help of a schoolteacher he's been seeing named Raisa (immaculately played by Noomi Rapace), Leo hatches a plan to stop the killer before he strikes again. The plot thickens when Raisa comes under investigation for espionage, an offence punishable by death. But Leo refuses to denounce her, and his choice sets into motion a chain reaction that puts both their lives in jeopardy.

Child 44, with its ominous score and tell-tale cinematography, combines the captivating storytelling of a noir thriller with the heart-pounding intrigue of murder mystery. It's a lengthy film but it's expertly paced so there's hardly any sagging, and the performances are compelling to say the least.

Hardy (Warrior) and Rapace (the original Girl with the Dragon Tattoo), nursing thick Russian accents, are impressive in their roles - with fine supporting work coming from Vincent Cassel (Black Swan) as a corrupt high-ranking weasel of a major and Gary Oldman (Tinker Tailor Soldier Spy) as General Nesterov, a brooding veteran who takes Leo under his wing when he is dispatched from the capital.

Though Smith's storytelling is a skilful merging of fiction and fact, the movie conjures up a dark chapter in Russian history, chiefly its war-torn past, combined with the ugly business of child killings. As a whole, Child 44 is as unsettling as its dark subject matter suggests and as gripping as the most brutally candid noir narratives. Tyrone's Verdict: B+

Email ThisBlogThis!Share to TwitterShare to FacebookShare to Pinterest
Labels: At The Movies, Current Cinema, Film Noir, Flick of the Week, Russian Cinema