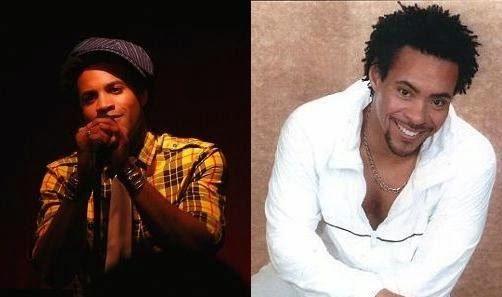 SHOW STOPPERS: Okera (left) and Heron both landed key roles in the production.

When Marley, the highly anticipated new bio-musical about Jamaica’s greatest reggae superstar debuts at the CenterStage Theatre in Baltimore, Maryland early next month, the show will be brought to rousing life by a wildly diverse and accomplished troupe of actors, among them a handful of young and talented Jamaican thespians, who are presently living and working in the States.

David Heron, the renowned actor-playwright (Against His Will, Ecstasy) will appear as Tony Welsh; fast-rising talent Shayne Powell steps into the role of Malakai, and the articulate Ano Okera will play Don Letts while lending his expertise to the production team as the show’s dialect coach. Meanwhile, the radiant Allison McLean, who has appeared in local productions like Basil Dawkins’ Where is My Father? scored a spot as a member of the ensemble chorus.

And in response to the question on everyone’s lips: who has the enviable task of portraying Bob in the show, complete with physical transformation and guitar riffs? That honour falls to actor-singer Mitchell Brunings, who became an international singing sensation in 2013, when he gave a pitch-perfect rendition of “Redemption Song” on Holland’s version of The Voice.

Brunings, based in the States, is joined in the cast’s top tier by other principals such as Seycon Sengbloh as Rita Marley; Susan Kelechi Watson as Marcia Griffiths; Crystal Joy as Judy Mowatt; Michaela Walters as Cindy Breakspeare, with John Patrick Hayden appearing as Island Records honcho Chris Blackwell and Damiann Thompson as Bunny Wailer.

When writer-director and CenterStage Artistic Director Kwame Kwei-Armah set out to write the script he knew he didn’t want to produce a clichéd retelling of Bob’s timeless story. Instead, he opted to settle on a specific period. As such, his Marley chronicles events surrounding the two years the Gong spent in self-imposed exile after surviving an assassination attempt in 1976, before going on to transform himself into one of the 20th century’s most important and recognizable pop-culture figures.

Explaining his process, Kwei-Armah told an interviewer, “I felt that rather than do a biographical musical about Bob Marley I would find the moment that personified who Bob was, and the run-up to the assassination attempt and the exile in London showed who he was and what he believed in.”

Artistically, the show weaves together dialogue with Bob’s original music, particularly anthems from his Rastaman Vibrations and Exodus era. With choreography by Germaul Barnes, music and lyrics from Bob’s catalogue, and book and direction by Kwei-Armah, Marley opens at the Centre Stage in Baltimore on May 6 and runs through June 14.

> For showtimes and ticket information, log on to centerstage.org