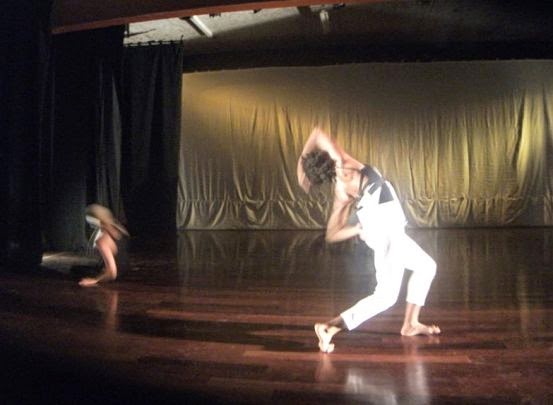 I AM LIGHT: A standout female dancer having a moment at this year's Danceworks.

O'Neil Pryce's work as a dance choreographer continues to evolve by leaps and bounds. With the discursive approach of forerunners like Clive Thompson and the stylistic daring of a Tony Wilson, Pryce is fast emerging as a creative powerhouse who consistently has something meaningful to say whenever a piece by him graces centrestage. Case in point: "Wherever a Dancer Stands is Holy Ground," which debuted to thrilling effect at Danceworks 2015 inside the Bert Rose Studio Theatre, Edna Manley College, last weekend.

Working with a quartet of agile dancers and music by Lisa Gerrard, Pryce delivered an evocative and thought-provoking work, the kind of artistic creation that rewards audiences who like to pay attention. In addition to the overall composition of the piece (equal parts solemn and spirited), I particularly enjoyed the unfussy energy of the performers who offered lithe movements to complement the dance's quiet and reflective aesthetic.

Also scoring highly on our scorecard that night was Pryce's "Inner Mappings ― The Story of Self," from 2014, a pas de deux featuring two excellent male artists (Richard Campbell and Shem Heliodore) moving stealthily about the stage in various states of undress, occasionally donning pieces of black clothing as they explored the twin ideas of identity and memory ― autobiographical and semantic ― as past and future. "Inner Mappings" was also a fine showcase of male beauty, the toned male physique, that timeless symbol of youth and virility, given pride of place.

These two pieces by Pryce ranked highly among the total of 12 works that comprised the 2015 repertory at Danceworks (nine were presented on our night), an annual mini-extravaganza that brings together the very best and brightest from the School of Dance (faculty and students) for a presentation that's always worth the trip down to the college.

This year we were treated to samples and works-in-progress from the likes of Artistic Director Neila Ebanks (who offered the intensely dramatic "Love? Waltzing Around It"), Abeldo Toki Gonzalez (who co-produced the edgy and entertaining "Temptation 123"), Camargo Smith (who gave us the moody and atmospheric "Compulsive Therapy") and 2013 graduate Orville McFarlane, whose pain-soaked solo piece "A Fragmented Soul," performed by the very competent Sasha Christian-Pinnock, was a moderate success.

Other highlights: Patrick Earle and company's lengthy yet riveting meditation on process-to-performance techniques "Studio Disclosure," which tackled both folk and modern forms, and Alice Berry-Gayle and company's "Skirt Frolic" which, living up to its name, closed the show with a flurry of hypervivid costuming and a burst of exuberant energy.