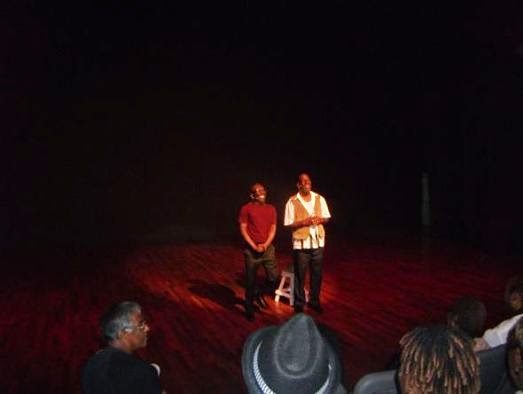 ENCORE: The comedians onstage at the Courtleigh Auditorium on Easter Monday.

Some years ago, Winston 'Bello' Bell and his wife were at home when he routinely picked up the ringing house phone, only to be met with a most startling question posed by a rather sweet and angelic voice: 'Can I please speak to the pastor who spreads joy?' Bello was naturally taken aback by the strangeness and ambiguity of the question and was at a loss for words - until he heard a familiar peal of laughter coming from the other end of the line and recognized the culprit as none other than his fun-loving, ever mischief-making partner in crime, Owen 'Blakka' Ellis.

The scores of ticket holders who flocked to the Courtleigh Auditorium this past Easter Monday to catch the Kingston leg of the legendary comedy duo's 30th anniversary reunion tour were in for a real treat, as Bello and Blakka regaled us with anecdotes like this one on a rip-roaring trip down memory lane — from where it all started for them leading up to the present day of Obama-mania, played out homophobia and the ganja debate, with stops in-between laced with witty social commentary. In a nutshell, their fabulous act (split into halves) lived up to expectations, while proving yet again that, when all is said and done, the comedy game still needs Bello and Blakka.

The show's best moments included their individual demonstrations of how to woo a lady with "lyrics" the right and proper way. Blakka swears by the fail-proof referencing of succulent fruits and Jamaican foods in his lyrics, while Bello (Edwardian Lothario that he is) favours lines like, "The moment I looked at you, the bowels of my heart sent forth a diarrhoea of emotions." Charming.

Then there's the self-deprecating humour surrounding the aging process (they are both 55), with Blakka citing the "offensiveness" of gray hair in certain places; the harassment Jamaicans are usually in for in Uncle Sam's land and, as expected, what makes someone authentically Jamaican.

"On stage we don't perform," Bello told the crowd once the uproar when the uproar subsided, "we just relax." And these experts seem to get their best results that way, showcasing a style that's as natural as it is effortless. What's more, the duo further solidify the timeless truth that there is no substitute for age and experience. "Ah long time we deh bout," Blakka said of growing older and wiser, "but don't tell my body."