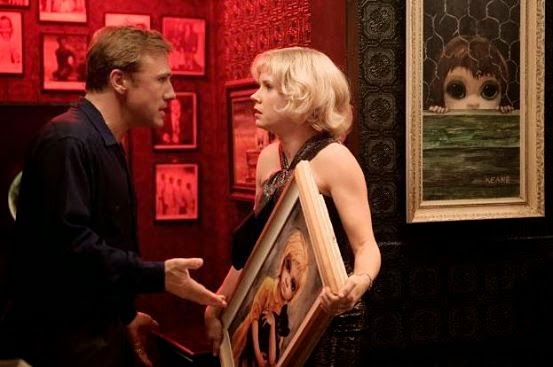 TWO TO TANGO: Waltz (as Walter) and Adams (as Margaret) in a scene from the movie.

There is a scene in Woody Allen's Vicky Cristina Barcelona in which Penelope Cruz's fiery Marie-Elena clashes with her estranged lover, a fellow painter named Juan Antonio (played by real-life hubby Javier Bardem), accusing him of stealing his "whole style" from her. It's a riveting, slightly humorous moment that pulses with with the raw passion of artists who take their work seriously. Having poured their blood, sweat and tears into the creative process, it's almost like their very souls are attached to the finished product.

In Big Eyes, you sense something just as urgent while watching the fireworks, though a bit milder, between Amy Adams' Margaret Keane and her conniving hubby Walter (a fellow artist played by Christoph Waltz) who has done the unthinkable: passing off Margaret's art as his own. Margaret is crushed by the betrayal, but it's 1950s California: housewife fashion is all the rage and the work of women artists is not taken seriously. (In an earlier scene, Margaret, having just fled her stifling first marriage in North Carolina, seeks employment from a San Francisco furniture maker, who wants to know if her husband allows her to paint.)

But the startling oppression of women aside, the most fascinating thing abut Big Eyes, audaciously directed by ingenious filmmaker Tim Burton (Alice in Wonderland, Sleepy Hollow), is Margaret's art itself that forms the film's unflinching focal point. You see, Margaret is no ordinary, cookie-cutter artist; she has a thing for painting sad children, giving them eyes so big you can't look away.

"You paint them like pancakes," Walter tells her of the eyes. "The eyes are the window to the soul... Eyes are how I express my emotions," Margaret responds in her delicate Stepford voice.

At first, no one will give Margaret's "hobo children" paintings (as one columnist describes them) the time of day, but when Walter takes it upon himself to sell her stuff, later taking on he identity of the artist, they start selling like hotcakes. Even posters of Margaet's work become must-have commodity. Before long, the Keanes have a burgeoning empire on their hands. But making art is a deeply personal process for genuine artists, so even though the money is pouring in, with Walter taking the credit for the work, inside it's tearing Margaret apart. For how long will she be able to keep up the charade, carry on the deception?

This is a Tim Burton film, so as much as it is based on a true story, Big Eyes comes to cinemas in quite an exotic package: hypervivid colours, innovative costuming (Coleen Atwood strikes again!), a Danny Elfman score and no shortage of wit and whimsy. It's a well-made movie, and much of the credit for its overall appeal falls to its magnetic leads Adams and Waltz, who yield note-perfect performances - especially Adams, whose Margaret is so heartbreakingly portrayed, you have to be made of stone not to feel her pain.

In the end, Big Eyes (which gets a haunting title track from Lana Del Rey) is not so much about the haunting visual power of art, but about identity, integrity and honesty, and what happens when all three are brought into question. Tyrone's Verdict: B+