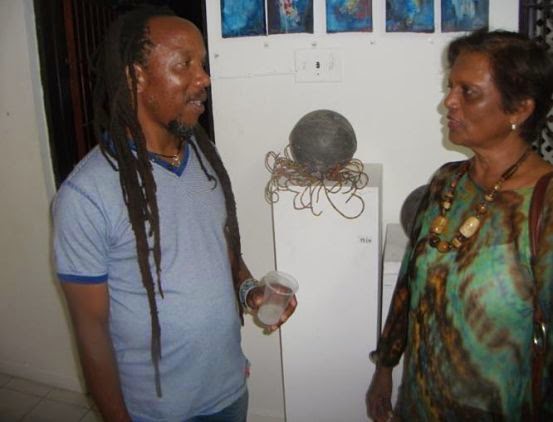 MOOD INDIGO: The artist, with art dealer Vera Ennis, discussing the evolution of his career.

The first thing that struck many of the attendees who stepped out in support of Mazola Wa Mwashighadi's latest solo art exhibition, Form at the Function (currently on view at the Redbones Gallery), is the eclectic array of media that comprises the Kenyan artist's latest body of work. It's a collection of 26 stunning pieces suffused with visual interest and telling stories centred on a range of ideas, chief among them the final days of the Messiah.

Mazola, who hails from Africa's Taita tribe but has called Jamaica home since the early 2000s, makes ample use of everything from wood to acrylic to metal and beads and a vivid palette of watercolours to create iconic works that are both arresting and conversation-starting.

Asked about his approach and way of seeing, Mazola makes it clear that he's not one to be pigeon-holed in his outlook on the world. In other words, he pains his work with colours taken from everywhere. "I have my preferences butt I'm not restricted," the middle-aged Rastafarian tells TALLAWAH as the room starts to fill up with guest sipping wine as they peruse the works on display. "Art is really all about freedom, and the way I see something is the way I say it."

That perhaps explains his radical take on the passion of Christ, which inspired such riveting pieces as the mixed-media standouts "Passover," "Last Supper" and "Resurrection of the Seed." "It's a space dedicated to Easter but you have to look deeper. I want my work to challenge people," he explains. "In several of [them] religion plays a big role. I look to the power of God, because I see the Bible as the ultimate book of values to live by."

Given his deep African roots, it goes without saying that much of the Motherland is reflected in Mazola's work - the continent's awe-inspiring natural beauty and vibrant culture. Sublime pieces like his "Swahili Bride Series", "Mangrove Sound Waves" and "Healer's Kettle" all speak to the artist's unmistakable Afrocentric heritage. "I enjoy his work; it's different from the usual landscapes and seascapes that other artists are into. He challenges himself, and I think his supporters appreciate that," says veteran art dealer and valuator Vera Ennis, who worked with Mazola during her days running the Pegasus Gallery.

She continues, "When he just came to Jamaica he did his first show with me at the Pegasus, and he sold a whole lot of the pieces. And then he went back to Kenya and returned with some even stronger work. He uses his imagination, and that's always a plus."

Mazola Wa Mwashighadi pours his heart into everything he does, and by his own admission, pulls inspiration from everything worthwhile that captures his gaze. At present, he's busy putting the finishing touches to a set of masks he plans to unveil to the world as soon as they're ready. "Being an artist you are just a conduit, just a messenger," he says, musing on the life artistic. "So things come to me, and I have to respond to them."