WALKING TALL: After 30 years in the biz, actor Michael Nicholson stays the course 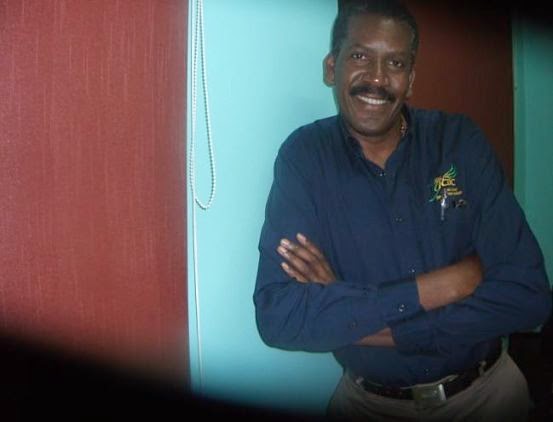 STAND AND DELIVER: "It's always a plus when you get to work with talented people," says the Prayer Partner star.

Here he comes, at last, a towering figure pushing the air with his sturdy shoulders in a stride that's unmistakably his. On a crisp Tuesday morning Michael Nicholson breezes into the offices of the JCDC on Phoenix Avenue in Kingston with the kind of authority that you're familiar with if you've been witness to his rise in Jamaican theatre and television, solidifying a career that now spans three decades. That's no small accomplishment, especially when one considers the fickleness of the Jamaican arts scene. But Michael has always been the type of artist who likes to be challenged, and that mindset has come to play a major role in his continued success.

Then there's that certain something that all great actors seem to possess in substantial measure: presence. But to hear Michael Nicholson explain what has kept him at the top of his game for so long is to be reminded of the power of perseverance and the art of keeping it simple. "I always aim for consistency in whatever I do, and I consider myself a real team player, easy to work with. And I enjoy my work," says the veteran actor and director, dressed for his interview in a simple dark blue shirt sporting the JCDC logo and matching pants.

Seated behind a broad work desk, he leans forward in his chair. "I've been blessed. For me, it's always a plus when you get to work with some really talented people, and I've been fortunate enough to work with some of the best, many of whom have rubbed off on me," he reports, laughing. "I have to give credit where it is due."

One more reason people are so drawn to Michael, thrilled to collaborate or to simply be in his company is that he's utterly humble. And when you combine such a fine quality with that fierce commitment to his job, the result can only be a class act. That's why over the years he's practically worked with everyone in the biz, sometimes wearing multiple hats. Stages Productions has tapped him to direct a number of comedies like Serious Business and The Plumber. He teamed up with Aston Cooke on projects like Jamaica 2 Rahtid and Concubine. He worked on several of David Tulloch's early works like the original Wine and Roses.

"Michael is the kind of director who brings out the best in the actors he works with, and I think that's why so many people have asked him to direct their productions," observes Tulloch, whose crowd-pleasing latest, Prayer Partner (still pulling sizeable crowds to Green Gables), finds Nicholson playing against type as the overprotective dad who believes in no uncertain terms that blood is thicker than water and only the best is good enough.

For Nicholson, taking on the pivotal role of Abe Jackson presented yet another uphill task too god to pass up. Lucky for him, he had a ready well-spring of inspiration to draw from. "I had to play real life. Abe is very protective of his daughter, and I'm like that when it comes to my own children," he reveals. And while he's a natural comic at heart, he says he has come to appreciate the play's high dramatic quotient. "I like that the role doesn't call for any physical comedy," he reflects. "It's always nice when a role allows you to step out of your comfort zone."

Comedy is undoubtedly Michael Nicholson's comfort zone, and his long association with with the popular CVM soap The Blackburns of Royal Palm Estate, in which his character Stringbeans consistently brings the laughs, is clear indication. When asked of the differences he;s encountered between working in TV versus doing live theatre, Nicholson offers, "TV is more intense, as simple as it looks. Because of the cameras it's more internal than physical."

A few more interesting facts about Michael Nicholson: After leaving Godfrey Stewart High he enrolled at the Edna Manley College's School of Drama, where he majored in directing. He singles out Jean 'Binta' Breeze as a major influence and encourager in those early years. By 1984, he was co-headlining his first pantomime Trash alongside the likes of Oliver Samuels, Dorothy Cunningham and Ted Dwyer, going on to do eleven pantomimes in total. He's done film, too, starring in 2003's One Love, opposite Ky-Mani Marley, Cherine, Carl Bradshaw and Idris Elba.

A life-changing classroom stint at Ardenne High (drama, literature, language) allowed this doting father of three to help mould the artistic lives of several of the bright young theatre practitioners we see enjoying the spotlight today. Reflecting on the road already travelled: "I feel good about my life at this point. I can proudly say I've accomplished much more than I thought I would by this age. And in terms of what I've done in theatre I have absolutely no regrets," says Nicholson, whose nine-to-five is events specialist at the JCDC. (Our role as an agency gets bigger and bigger each year," he notes.)

And for a man who holds the distinction of witnessing every major theatre production he's ever directed win or be nominated for an Actor Boy Award, isn't it high time he started a production company of his own? "That's one of my goals right now," he tells TALLAWAH, his voice tinged with modesty. "I'm just gonna throw my hat in the ring." And in case you're wondering what he's bringing to the table, the fifty-something Nicholson, a 2002 Actor Boy winner for Oliver's Posse, says it's all in the element of surprise. "[My colleagues] in the industry take me very lightly," he says, "but I like it that way."