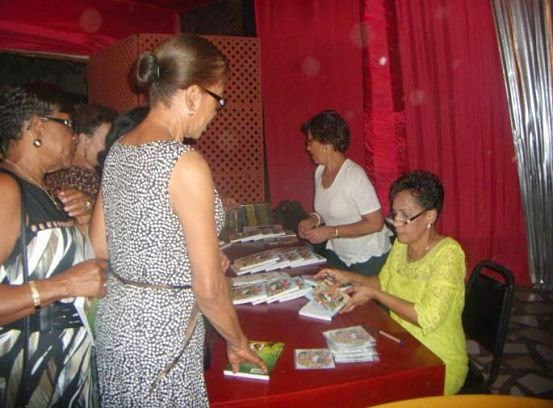 STORY TIME: "This book is about us and who we are," says actress and poet Leonie Forbes of Hart's effort. Above, the author signs copies at the launch.

About midway through Wednesday night's celebration-themed launch of Donna Hart's new book Mek Wi Laugh & Talk: An Anthology of Jamaican Poems, emcee Arnold Kelly made a point of inviting the entire Hart clan (about a dozen of the event's attendees) to the podium for a special family moment ― some three generations of close-knit Hart relatives drawn together by a singular element that's always brought them merriment and the enjoyment of each other's company: good ol' fashioned Jamaican humour and storytelling.

If the samples offered on Wednesday are anything to go by, Hart's book (a self-published collection) has no shortage of humour steeped in the local creole, plus the wit and island wisdom that distinguish Jamaicans from everyone else. The book already has one major fan in Leonie Forbes, who published her own anthology, Moments by Myself, a few years ago. "I know it's going to be a fabulous success. It is us and who we are as a people," she says of Hart's book. "Each poem I come across makes me treasure it more. I'm promising that this book will be part of my travel package as I go around the world reading."

During the launch party, readings were not exactly in short supply and provided some of the night's highlights. By popular demand, longtime family friend Deon Silvera made repeat trips to the podium to share pieces like "When Mi Was A Child"; Karl Hart broke out a bit of costuming for a piece extolling the wonder of Jamaican "Bush Medicine" while several other readers addressed themes ranging from self-empowerment, healthy living and 'badmind' to spirituality, religion and country, eliciting much laughter and sustained applause.

"I'm pleased to be in my homeland to do this book," the St. Mary-bred Hart, who is embarking on a radio, morning-TV and book-signing tour to promote her effort before returning to her base in Florida next week. "Many of these poems are about the qualities that make Jamaica such an amazing and unique place to call home, but the book is also my little way of encouraging us, as Caribbean people, to live more fulfilling lives."

> Now on sale via Amazon and local bookseller, Mek Wi Laugh and Talk is also available in CD format.