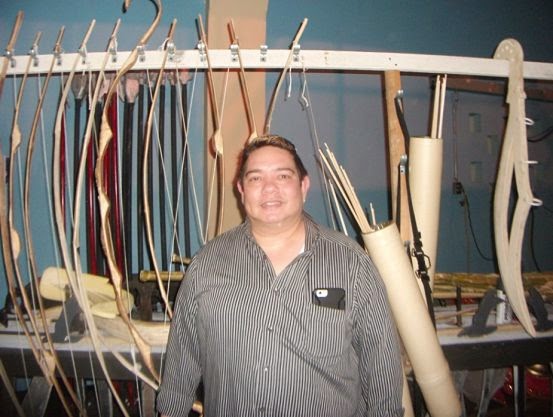 DIRECTOR'S CUT: "I was a bit nervous about taking that next step," admits Thames, pictured here in the production's props area.

It's the first night of pre-show rehearsals inside the National Arena for the cast and crew of Father HoLung & Friends' King David, and the venue is unsurprisingly abuzz with activity. The set and lighting design guys are working up a sweat constructing the multi-layered stage; volunteers are wrapping up a meeting; chorus members are going through their paces.

Director Greg Thames, the man in charge ― the creative mastermind tasked with bringing it all together ― readily admits to a touch of fatigue. But he deserves a pass. After all, he's been 'on' all weekend, leading back-to-back seven-hour sessions at their off-site rehearsal venue near Heroes' Circle, not to mention putting in the hours at his demanding day job as the IT Implementation Manager at Tara Couriers.

But Greg is no stranger to the pressure that comes with mounting a show of King David's magnitude. He's done it several times before in fact, and has become the go-to guy for directing the annual Biblical-themed blockbuster epics put on by Father HoLung & Friends to raise much-needed funds for society's less fortunate. "Before I started directing I had done a lot of technical theatre, stage management, costume design. So I was a bit nervous about taking that next step," Thames admits, "but Father knew I had it in me, and so he gave me that push to start directing, and for that I'll always be grateful."

To wit, King David, which opens at the Arena on May 7 for a limited run, will mark Thames' sixth outing as the man calling the shots on a HoLung production. In addition to helming The Messiah, Jam Reggae Opera, Acts of the Apostles, Yes and last year's retrospective Candles in the Dark, Thames has brought his skills to remounts of numerous productions across the US, the Caribbean and in the Philippines.

But what probably sets King David apart from his earlier work is the size of the cast he's working with this time around ― a 70-plus member aggregation comprised of principal actors, supporting actors, dancers and chorus of adults and children, youth and experience. "It certainly demands a different approach," the 52-year-old artist says of directing a big ensemble. "It's less about the size and more about the substance that the team has to bring to the audience. You have to be constantly thinking about the image that's being created onstage. It's not just a crowd of people gathered together on the stage; they are there to tell a story."

A three-time Actor Boy winner (in the technical categories solely), Thames is the kind of thinking artist who brings real intellect to his work. He's constantly reading scripts, visiting theatre houses from Kingston to New York's Broadway district to London's West End to compare notes and styles in his quest to hone his craft and consistently bring something imaginative and fresh to the table. "For me, inspiration comes from a variety of sources," shares Thames, who has also done work with the Cathy Levy Players among other local-based troupes. "I enjoy theatre-going to see what other directors are doing. I like to travel and absorb. You'd be surprised at what you pick up. That's how I've been able to develop my abilities as a director."

The awesome results speak volumes, and Greg Thames' industry peers readily big him up. "He's a very thorough director," says lighting and special effects maestro Robin Baston, who has collaborated with Greg on all the HoLung & Friends production he's done to date. "We're friends so sometimes we sit for hours and hours planning out the show, scene by scene. And that ensures that we're always on the same page."

For mentor Alwyn Bully, Thames possesses a keen understanding of what makes a stage musical roar to life. "He's very astute, and he obviously has a great sense of musical theatre," observes Bully, who is serving as an advisor and consultant on King David. "I think this production is going to be a very good example of his fine abilities as a director."