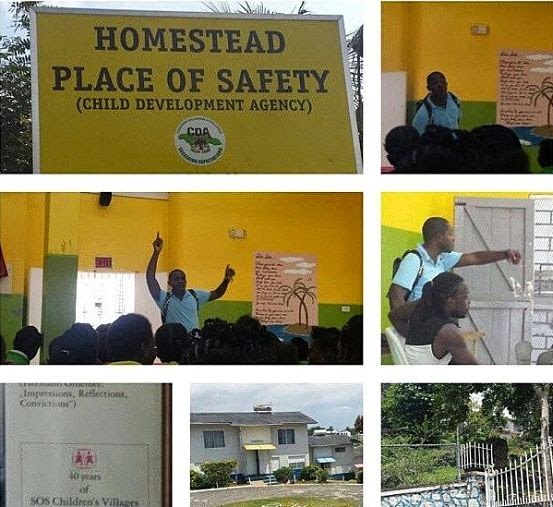 SPEAK NOW: On a mission to  motivate, the May I Speak tour made a recent stop at the Homestead Place of Safety in St. Andrew.

The name says it all: Articulet is about expression. But the group's members, particularly forward-thinking Artistic Director Randy McLaren, remain equally steadfast on a mission that's all about "entertaining change" while shining the spotlight on issues impacting the lives of members of their generation.

Consider their upcoming edutainment production, May I Speak, a Child Month special that promises to spark an open dialogue about the youth-related issues of the day, while fusing drama with dub poetry and music for a vibrant theatrical experience. "With this particular production, and it being Child Month, we wanted to explore different child rights issues like abuse, parent-student-teacher relationships and teh role of teh community," explains McLaren, who has rounded up a talented bunch of six (three males and three females) to take the message to the masses.

Under the direction of Bryan Johnson (Jonkanoo Jamboree), the cast of Julene Robinson, Jomo Dixon, Shanique Brown, Nicholas Amore, Crystal Lattibeaudaire and Dexter Johnson will perform for student audiences across the Corporate Area and a few other parishes throughout the month. Completing the package, May I Speak will also include a post-performance discussion segment for the all-important feedback.

While the list of participating schools is being finalized, a special gala performance of the show has already been set for May 22 at the Little Little Theatre to benefit the survivors of the 2009 Armadale Fire, an unforgettable tragedy that continues to influence McLaren's creative output as writer, performer and social activist.

"I see that they are still struggling to recover from the tragedy. Several of the survivors desperately need help in terms of reintegrating backing into society, so the funds from thos fundraiser will go towards assisting them," McLaren explains. "We also have a family that we've been helping out with school fee and food items for some time now, so we want to raise more funds to keep that initiative going."

Ever since he burst onto the arts scene a few years back, with his hard-hitting lyrics and commanding stage presence, McLaren (the 'kreativ aktivis', as he is widely known) has used his increasing clout as an artist to address some of Jamaica's most pressing social causes, youth issues as priority. Now, as the Artistic Director of Articulet (started in 2013), which he runs with administrative manager Veronique Smith (stage manager for Divorce Papers), he has a much bigger platform to carry forward is vision.

"I'm happy with how my career has taken off and how my involvement in the arts continues to bear fruit," the 27-year-old tells TALLAWAH, sitting down for an interview at the Little Theatre recently. "What I talk about in my work, the issues I choose to address are out of concern for other people," he adds. "I can't just see things happening and not say anything. I'm living my passion by dealing with the real issues."