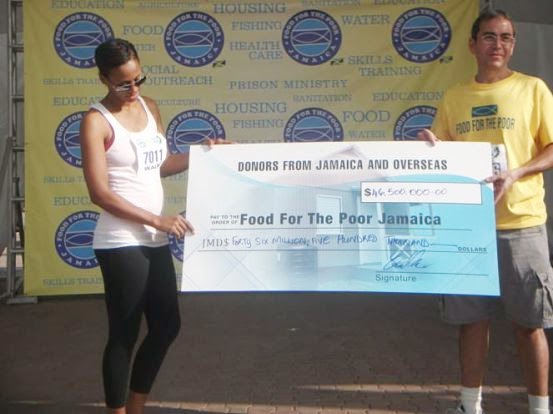 A RUN FOR THE MONEY: Patrice Graham presents Food for the Poor Chair Andrew Mahfood with a symbolic cheque for the total amount raised.

Signalling a record haul for an inaugural event of its kind, Food for the Poor on the weekend raised $46.5 million through its 5K Run/Walk, which brought an overwhelming number of participants to the Emancipation Park on Saturday morning. The funds will be used, the agency says, to construct 56 hew houses for needy Jamaican families.

"It's our mandate at Food for the poor to support the less fortunate, uplift their spirits and help give them a sustainable new start to life," Food for the Poor Chairman, Andrew Mahfood, tells TALLAWAH. "The truth is if you see where most of these families have been living you wouldn't call that a home. We want to bring these families together and give them somewhere better to live. The children will be able to study harder and be better able to make meaningful contributions to society in the future."

Hundreds of civic-minded Jamaica, the majority representing various corporate entities and fitness teams, showed their endorsement of Food for the Poor's mission by lacing up their sneakers and hitting the streets of New Kingston to complete the race that had them criss-crossing the breadth of New Kingston in the early morning.

In the end, Kingston College's superfit Shane Buchanan outshone the men to cop first place, while on the women's side the well-toned Carlene Blagrove of Pacers Track Club emerged queen of the pack.

Mahfood has no doubt in his mind that, as the years go by, the 5K will advance from strength to strength. "I think by word of mouth especially, it will certainly grow a little bigger," he says. "And when people see the before and after realities of our beneficiaries more of them will come on board."

Douglas Orane feels exactly the same way. "I'm happy that Food for the Poor has achieved this kind of success in the first year, and that the funds are going towards a most worthy cause, supporting the poor people of Jamaica," says the GraceKennedy boss, who donned his workout gear to join the sea of runners and walkers on the road. "I really enjoyed participating. It was a wonderful road."

Meanwhile, lending some star power to the event, emcee Kamila McDonald and Food for the Poor ambassadors like NoMaddz, Yohan Blake, Sharon Burke, Twin of Twins and Shaggy also took part and made presentations to the top finishers, to bring the curtains down on a successful inaugural staging.