ON HER MIND: Hurricane Honeymoon star Natalee Cole recounts the moments that led to her artistic breakthrough 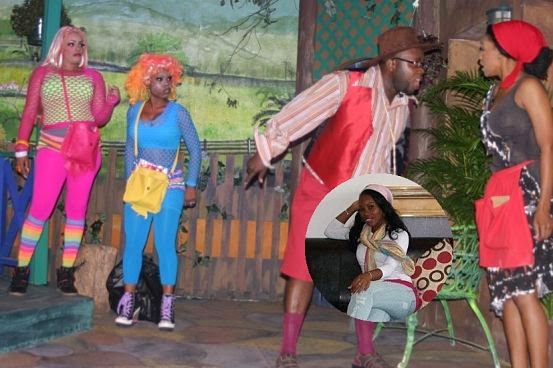 STRENGTH OF CHARACTER: "I've benefitted from working with different kinds of talent," says Cole (centre), sharing a scene with costars in Glass Slippaz.

“My two main passions in life are acting and teaching, and if I can get to do both then my life would be complete,” shares actress Natalee Cole about pursuing the work that the universe has been offering to her.

For the past few years at least, Cole has been doing so with relish. In addition to steadily building a solid body of work in the theatre, she’s been changing lives in the classroom at Kingston College, where she teaches English Language, Literature and Communication Studies. At UWI Mona, where she majored in Linguistics, she’s served as a tutor and assistant lecturer since last September. “Ultimately I want to be a professor, but I don’t want to ever leave acting behind,” the thirty-something go-getter hastens to point out.

Solidifying her place among the exciting crop of Jamaican theatre's emerging leading ladies, Cole brings to the table that rare and inspiring blend of gravitas, conviction and supersized intelligence that made her a standout in hit shows like Amen Corner, Ras Genie, University of Delcita and the smash musical comedy Glass Slippaz in 2013.

But, for Cole, the breakthrough moment that started it all originated with a call from a certain prolific playwright in 2009. “The moment when things seriously changed for me was when I got a call from Patrick Brown about the opportunity to star in Puppy Love with Oliver Samuels,” recalls the actress, who was so over-the-moon happy she had to ring up her mom all the way in Colorado to share the good news.

For every aspiring Jamaican actor like Natalee, Oliver had always been the man. “Oliver is someone I’d been watching on TV from I was a little girl. So to co-star with him in my first major commercial production was like a dream come true.”

Fast-forward seven years, and Natalee continues to surprise herself – even making the leap at UWI from an MPhil programme to PhD studies in record time. Pleased as she is with her mile-a-minute success in both academics and the arts, Cole is only warming up. At the moment she’s in the thick of rehearsals for her tenth production, Hurricane Honeymoon, a remount of the fan-favourite comedy drama by Brown, who is now beginning to seem like a sort of fairy godfather.

Set in a honeymoon suite, it’s an explosive three-hander co-starring Glen Campbell and Akeem Mignott and opening this month-end at the Little Theatre. “This role is extremely different from the roles I’ve done in the past and who Natalee is,” Cole says of playing the long-suffering Hilda Charm. “She’s a very sheltered and naïve individual. Very fragile. I’m so not fragile. So it’s been a challenge. But I enjoy taking on new challenges like these, so I’m having a good time going at it.”

What’s more, the production marks her first time securing bonafide leading-lady credentials. And though it’s the most emotionally taxing journey she’s embarked on, she feels she’s been more than adequately prepared. “My overall experience has been amazing,” says the Manning’s High and Mico College alumna who plans to don her producer’s hat and take a swivel in the director’s chair someday. “I’ve really benefited from working with different kinds of talent over the years. I’ve grown. I’m more mature. And I feel there’s so much more left for me to attain.”

> Catch Cole and her costars heating up the stage in Hurricane Honeymoon, May 30-June 21, at the Little Theatre in Kingston.

Email ThisBlogThis!Share to TwitterShare to FacebookShare to Pinterest
Labels: My Testimony, Natalee Cole, On Her Mind, Stage Stars, Voices