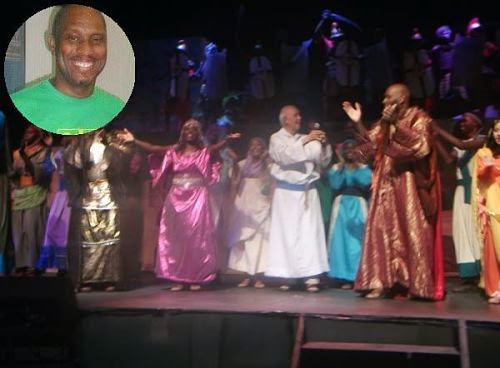 IN THE MOMENT: Williams, with the cast of King David, rocking out at the Arena. Inset, the leading man.

Drawing on his naturalistic acting style, Broadway-ready singing voice, and manly-man toughness, Wynton Williams has carved a stellar career out of playing conflicted Biblical heroes who find it virtually impossible to yield not to temptation. After storming the boards in blockbuster hits like Moses, Isaiah, Acts of the Apostles and The Messiah (all by Father HoLung & Friends), this month Williams returns to familiar territory as the titular monarch in the song-and-dance epic King David, revealing even more depth and range. TALLAWAH caught up with the reluctant star, 49, to talk music, message and making a life-changing commitment.

TALLAWAH: You've played a principal role in nearly every Father HoLung & Friends show since the group's inception almost 30 years ago. What did King David offer that was decidedly different from everything else you've done?
Wynton Williams: It is without doubt the most complex and challenging show I've been a part of. We did an earlier version of David, back in 1986 I believe, but it was predominantly music with a bit of drama in the second half to make the show more interesting. Doing King David is not like Moses, with all those special effects and heavy set design. It's more of an emotional journey than anything else.

TALLAWAH: There are so many layers to an enigmatic character like David. Could you relate to him at all?
W.W.: That's one of the things I appreciate most about the character; how much of an enigma he is. He is what you call a man after God's own heart, so the question I've always asked myself is, What could have caused him to slip in such a major way?

TALLAWAH: Some would say temptation and weakness.
W.W.: While I was doing the research, it really bothered me. In my own life I'm a Christian and I consider myself a free spirit as well, and if David's story has taught me anything, it's to always be careful. And, at the same time, God's tremendous capacity for forgiveness. David was a man whose weakness got the better of him, but he became an instrument through which God demonstrated his immense kindness and compassion.

TALLAWAH: As expected, the music in the show is just incredible. As Musical Director, what did you enjoy the most about creating such a memorable score?
W.W.: We always try to give the show a mix of styles and sounds, so you'll hear some powerful ballads, some reggae rhythms and dancehall flavour and the spiritual stuff. The music has to reflect the overall mood of the production.

TALLAWAH: You're such a gifted actor, yet we never see you performing in plays or other commercial productions on the Kingston stage. Is that deliberate?
W.W.: (Laughs) That's because I'm committed to Missionaries of the Poor. Working with Father HoLung and Friends is a full-time and very demanding commitment. After [King David] we have a lot of touring to do. So even though I might not seem active, there's always some behind-the-scenes work going on.

TALLAWAH: Where will the upcoming tour take you guys?
W.W.: We have Toronto in a matter of weeks. We'll be in Australia for most of July, and in September we fly to Chicago. It's a lot of work, but whenever we go overseas we always try to have a good time. But fulfilling the mission and putting on a good show is the ultimate goal.

TALLAWAH: Speaking of fun, when are you happiest?
W.W.: (Laughs). If the message that we're trying to bring across in the show is properly communicated to the audience I feel at rest and at peace. It's not about the hype; it's about the message.