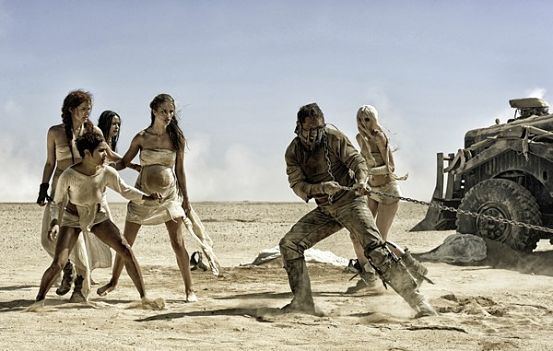 ALL OR NOTHING: A fight for survival plays out in the box-office-topping action thriller. (below), Theron puts on her game face.

Is there any acting challenge too great for Charlize Theron? The South-African-born Hollywood siren seems to pride herself on disappearing into roles that are odds with her luminous beauty and take her to dark places, which is usually where the good work lies. You'll recall her steely cop, opposite Tommy Lee Jones, in In The Valley of Elah, her lacerating portrayal of a tough small-town miner in North Country and, yes, that chilling tour-de-force as serial killer Aileen Wuornos in 2013's Monster, her Oscar-winning role.

But, for my money, she has scored her most brutish part yet, playing the one-armed force-of-nature Furiosa in George Miller's Mad Max: Fury Road, opposite Tom Hardy. Dark and wrenching and filled with unexpected twists and turns and some of the most ghoulish characters seen on-[screen in recent times, the film is a boisterous and bombastic trip into the dangerous mind of one of modern cinema's most fearless provocateurs.

It's set in an apocalyptic wasteland that looks like a stand-in for Hades, ruled by a merciless madman and populated by depraved creatures who wouldn't be out of place in Freddie Kreuger's world. It's a savage place to exist, no wonder Furiosa has loaded up her rig, rescued a bunch of girls being kept as breeders, and fled for greener pastures. This, of course, draws the ire of the men who set out after her to reclaim what they deem rightfully theirs. What results is a punishing trip across barren lands, where Furiosa encounters Max (Hardy), a loner on a similar survival quest. Furiosa and Max soon join forces against their common enemy, waging an epic battle that features some truly out-of-this-world visual effects and breathless chase scenes.

An unforgettable viewing experience that spares no punches, Fury Road is the season's most action-packed thrill ride and proves equally rewarding for its terrific leads Theron (rocking a fierce baldie) and Hardy (all brawn and silent-type machismo). The likes of Zoe Kravitz and Nicholas Hoult put in sterling supporting work.

But in the end, it's Miller's vision (he also co-wrote the script) and smart directorial choices that leave the most lingering impression. Mad Max: Fury Road shows us a rather extremist kind of existence - it;s not for the faint of heart - where you'll drink your sweat for water because at least you know it's not contaminated. Tyrone's Verdict: A-