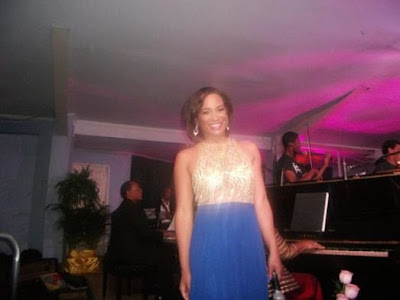 THE SOLOIST: Striking a pose during the show's climax; (below) sharing a candid shot with Bellamy.

Whether you were left mesmerized by her glorious multi-octave soprano, dazzled by her exquisitely designed costumes, or impressed by her repertoire that moved easily between classical and opera, pop standards and traditional Jamaican folk, there was something for everyone at the Jamaica Theological Seminary's Unconditional love: An Ode to Mothers, featuring the amazing Ana Strachan in concert, at the Swallowfield Chapel on Sunday.

Her melismatic vocals aside, Ana effortlessly exudes a multi-generational appeal that has won her ardent admirers, ranging from Lady Rheima Hall, Philip Paulwell and Olivia 'Babsy' Grange (who all sat up front) to the cool aspiring songbirds of the American International School's Glee Club, who backed her up on a couple of songs Sunday night.

And about those songs. Excellent choices all. But there's something to be said for the singer's pitch-perfect renditions of Dvorak's "Songs My Mother Taught Me"; the mournful 'Vilja" from Franz Lehar's The Merry Widow and the simplistically beautiful "Elle a Fui" from Offenbach's Les Contes d'Hoffman.

The nearly three-hour recital (split into halves) was billed as a celebration of amor, and there were enough romantic ballads and heart-tuggers to fill a small songbook. Best of all were her refreshing interpretations of "Tonight" from West Side Story, a duet with Rory Baugh, whose commanding tenor its own showcase; the deliciously snazzy "Love Walked In" from Gershwin's The Goldwyn Follies, and "Mama," the ultimate mom-you're-one-in-a-million anthem, whose poignant lyrics deserve to be savoured and read aloud as poetry. 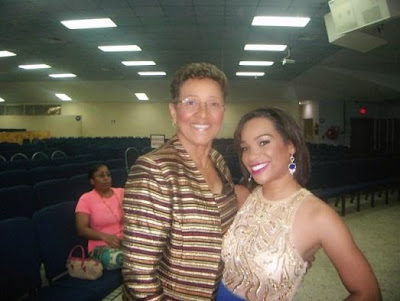 Perhaps just as poetic were Ana's fresh spin on Sondheim's "Not While I'm Around" (a jazzier update than the Barbra Streisand original) and "Will Someone Ever Look At Me That Way," a highlight from Yentl, the film that announced Streisand as a bonafide star. To close out the first half, Ana took us to church with performances of "Give Me Jesus", "Ain't That Good News" and the sprightly "On Ma Journey Now" - a trio of ageless spirituals wondrously reimagined.

Seretse Small and his trusty guitar, rising young cellist Kadeem Leslie, and the National Youth Orchestra each got their shining moments - put to effective use. Supporting musicians Paulette Bellamy, John Williams, Fitzroy Bennett, Paul Madden and Jeremy Ashbourne brought a true touch of elegance to the evening, as they accompanied the performers on keys, strings and drums respectively.

But, naturally, the night belonged to Ana whose regal air and golden notes drew us in like bees to honey — and left us wanting more.