5 MINUTES WITH: Rising Stars’ Sharon Schroeter on staying power, TV production, and her next move 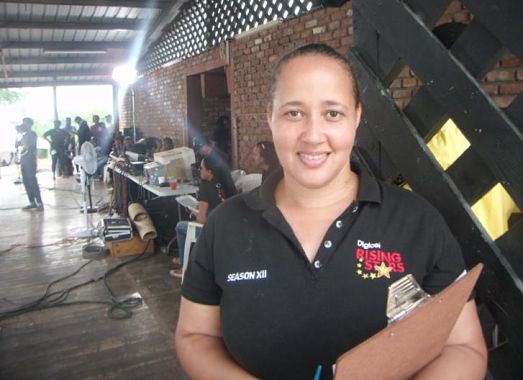 Sharon Schroeter is a producer’s producer. For the past decade-and-a-half, the TV-J veteran has been the creative mastermind behind some of our much-loved programmes, none more so than Digicel Rising Stars, which is about to kick its 12th season into high gear. But we’ve always felt that Sharon, given her drive, diligence and expertise, has much more to offer – and on a larger scale. So, with her imminent foray into filmmaking, one can only conclude, It’s about time. At Sunday’s Kingston leg of the 2015 RS auditions, at the Ranny Williams Entertainment Centre, TALLAWAH chatted with the 35-year-old working mom about art and life, passions and plans for the road ahead.

TALLAWAH: Hard to believe but Season 12 of Digicel Rising Stars is already here! What keeps you fired-up about producing the show season after season?
Sharon Schroeter: I have a passion for the show. And Rising Stars is about finding and nurturing the talent. The show gives them a platform to showcase the talent – a platform that they wouldn’t have otherwise.

TALLAWAH: We haven’t heard much from T-Rizzy and JL since they dominated last year. What’s the latest on them?
S.S.: The thing is, JL was in school when he entered the competition last year, so he’s back in school now. T-Rizzy has recorded some stuff, and he and JL did a song together. T-Rizzy is also back in school. But hopefully this summer we’ll hear some more from them.

TALLAWAH: You documented your weight-loss journey for a series that aired on TV-J in 2014. Looking back on the overall experience, was it all worth it?
S.S.: Yes (Laughs). I did my weight-loss show because I’ve always wanted to do a TV show like that – looking at health and wellness issues. I also wanted to inspire viewers and let them know that when it comes to weight loss and staying in shape it can be done. The show is a work-in-progress, so there’s more to come.

TALLAWAH: What’s been happening with On The Verge?
S.S.: I am no longer attached to that show. It started to clash with other projects I was working on, so someone else is producing it now.

TALLAWAH: Are you interested in pursuing production ventures outside of TV? How about feature film?
S.S.: I’ve always wanted to do documentaries, and I’ve started to write something already. So that’s my next move.

TALLAWAH: What’s the most rewarding aspect of your working life these days?
S.S.: The reason I got into television is to make a difference. So whenever I’m getting to do work, and it’s having an impact I feel fulfilled.

TALLAWAH: What advice do you have for young Jamaicans interested in your line of work?
S.S.: It has to be your passion; you have to really enjoy doing it. And be prepared to work very hard.