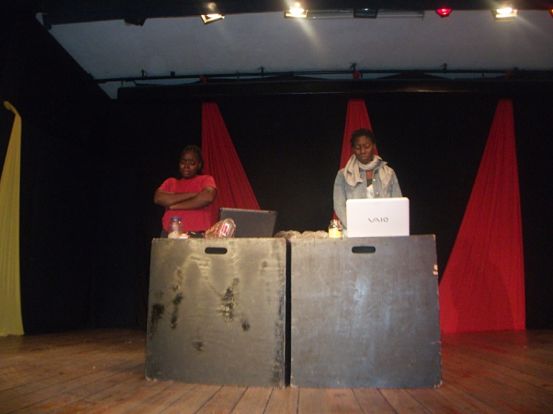 THE TIES THAT BIND: Smith and Robinson as an estranged mother-daughter duo rekindling their bond.

The Articulet ensemble's winning new edudramatic revue May I Speak strongly bolsters the argument that youth theatre is thriving in Jamaica, even as the powerful production sparks an open dialogue about child abuse, bullying, and the state of the Jamaican family. But the show is all the more noteworthy for heralding the arrival of a captivating new voice in Jamaican playwrighting ― Brian Johnson, the show's writer and director who reveals a gift for combining weighty drama and lighthearted comedy with meaningful message.

Theatregoers already know Johnson as the vocally gifted and versatile young actor whose credits include Jonkanoo Jamboree, For Black Boys, and numerous small-scale works at Mona's Philip Sherlock Centre that have secured him a place among the class of fast emerging leading men. But, as it turns out, his artistic gifts extend beyond the stage, and the dialogue, plotting and keen eye he brings to May I Speak offer solid testament to his overall abilities. Alongside, the appealing performances from a cast that includes standouts like Jomo Dixon and Julene Robinson, that's why the show works so well.

A terrific addition to the culture offerings for Child Month, May I Speak succeeds in having children 'speak for themselves' in a range of settings spanning the home, the classroom and the playground. More often than not the revue's sketches are at once relatable and realistic, depicting scenarios that reacquaint, provoke thought or uncomfortably hit close to home.

Robinson and Veronique Smith do a fine job portraying a UK-based mother and daughter in Jamaica rediscovering their long-lost bond via Skype; Dixon and Nicholas Amore bring enormous grit and pain to their portrayals of two fatherless brothers whose family is being torn apart by gang violence; the shame and trauma of sexual abuse leaps to life in a shattering scene rendered by Shanique Brown and Smith as a mother and daughter coming to terms with painful chapters in their past. And the list goes on.

Along the way, the audience is left to ponder their own circumstances and the price we often pay for keeping things bottled up inside. With May I Speak, which is heading to schools islandwide, Johnson and the talented Articulet crew are raising their voices with awesome results. The production, sporting a minimalist set and vibrant lighting may represent an outstanding writing (and directorial) debut for Johnson, but kudos are due to the entire cast and technical crew involved. Tyrone's Verdict: B+