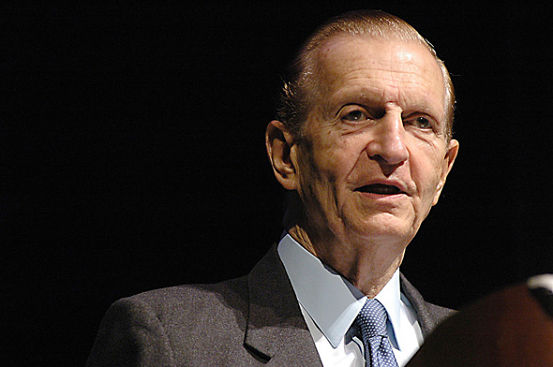 What makes Edward Seaga tick? How does he really feel about the many accomplishments for which he’s been hailed as the consummate nation-builder? Who is the Edward Seaga we don’t know?

Two-and-a-half hours is hardly enough time to provide the answers to all these questions and more, but a team at the Creative Production and Training Centre (CPTC) didn’t shrink from the challenge and have produced an excellent documentary, Edward Seaga: From Rebel to Leader, that enlightens viewers while putting much of the legend’s life in proper perspective. The result is an exhaustive and fitting coda to an extraordinary life in the public spotlight.

Tracing Seaga’s early years, his eventful political career, family life and groundbreaking work in the arts and academia, the documentary is never less than engrossing, championing its subject as a man of the people, a man of action, and a fearless leader who specialized in results.

There he is as the trailblazing head of the Jamaica Labour Party (JLP) spearheading a relentless campaign as he sought to inspire a vision for Jamaica’s future. We watch his meteoric rise to become the country’s fifth prime minister, the incredible strides he made in establishing West Kingston as a JLP stronghold while winning nine consecutive General Elections, how he weathered crises like 1988’s Hurricane Gilbert, and established policies that impacted lives way beyond our shores.

Your eyes (and ears) are glued to the screen when details of the US Invasion of Grenada begin to emerge and feel a swell of pride witnessing anew the game-changing ‘truce’ with Michael Manley, inspired by Bob Marley, at 1978’s One Love Peace Concert.

Throughout the film there are instances of Mr. Seaga candidly reflecting on the journey in video-diary style, and the CPTC managed to secure dozens of testimonials from those who know him best – family members and former colleagues – mixed with priceless archival footage.

We hear from the likes of Dudley Thompson, Dennis Lalor and R. Danny Williams, academics Dr. Stephen Vasciannie and Prof. Brian Meeks among others, and fellow political heavyweights Andrew Holness, Desmond McKenzie and P. J. Patterson, who couldn’t have echoed the overarching sentiment more lucidly when he remarked, “One might disagree with [Edward Seaga], but you never take him lightly.”