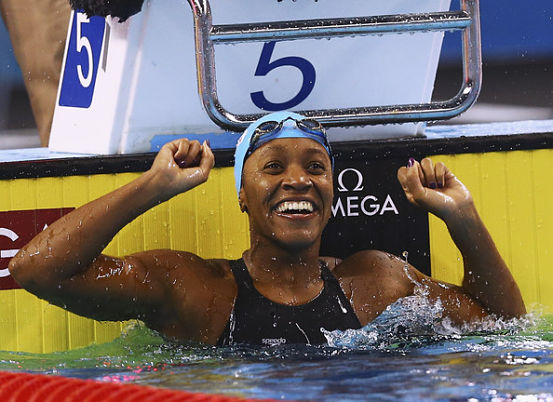 I'M YOUR VENUS: Atkinson, celebrating her history-making feat in Doha, is the subject of a must-see documentary. Below, the filmmaker in Kingston.

When Alia, Darling of the Pool makes its world premiere at the inaugural Jamaica Film Festival in July, the documentary feature will mark the culmination of months of painstaking hard work by first-time filmmaker Donald Oliver and his creative partner Jason Sawyers. After all, Oliver, whose journalistic savvy gave birth to the film, is a workaholic with a notorious perfectionist streak.

"It's exhausting work, to be honest, because I like telling detailed stories and capturing something memorable with that story," he tells TALLAWAH, kicking back inside a cozy interview room at CVM TV, where he's worked as a sports journalist since 2008. "I like telling stories that explore fundamental truths about the subject and translating it to the bigger picture for the audience."

No doubt he found plenty to explore while compiling the Alia Atkinson footage, conducting dozens of interviews, and putting it all together into a compelling whole. Oliver chuckles when he recalls his first encounter with Atkinson to discuss the possibility of doing the project that would chart her journey from childhood to the present day, capturing key moments like her Olympic stints, career struggles and triumphs.

Though Alia was a bit guarded, nervous about green-lighting such a project, she had seen Donald's report on her Doha win - a big hit on YouTube - and was beyond impressed by the thoroughness of his report. Eventually she warmed to the idea of a film crew tracking her every move and soon the project got off the ground.

Having re-watched features like The Fastest Man Alive for inspiration, Oliver took to the project with gusto, knowing he had waded into deep waters, and people were expecting him to deliver. "When I was growing up I didn't like documentaries," he remembers, "I thought they were too long and boring. But now I find them more engaging, especially the sports features," adds Oliver, a past winner of the Prime Minister's Youth Award for Excellence and an ardent fan of investigative programmes like CBS' 60 Minutes and ABC's 20/20.

At the moment, the 30-year-old reporter (who received the blessing of Alia's family and secured interviews with some of her dearest friends) and Suarez, his director of photography, are now putting the finishing touches to the film. "We only have a few more shots to work on," he says."

Friends of the duo pitched in to contribute music to the score, and though there are clips courtesy of FINA and news reports of Alia's exploits, Oliver says their primary aim is to deliver an original product - one that can compete for prizes and hopefully get picked up for festivals abroad.

The film, shot in HD and financed entirely out of their own pockets, will have a running time of approximately 75 minutes in keeping with the guidelines stipulated by the film festival organizers. But before festivalgoers and jury members take their front-row seats, a special screening will take place sometime this month for Alia's family and members of the Amateur Swimming Association of Jamaica (ASAJ).

As you can imagine, Donald Oliver is beyond grateful to his subject for offering him this career-defining opportunity. Plus, he's been a huge fan of hers from day one. "I think what she as achieved in the sport so far is out of this world. To be the first one breaking that kind of barrier couldn't have been easy," he reflects. "And she did it with such humility. She has a thing about her where you just have to wish her well. And I think that's something that draws people to her. She deserves everything good."