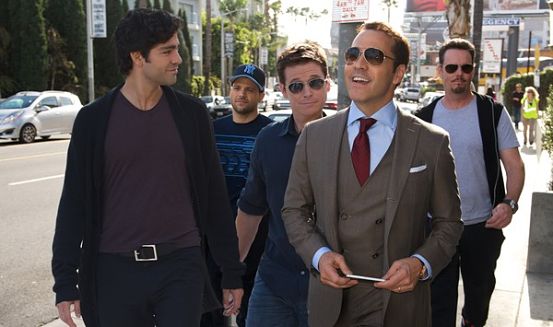 LIFE OF THE PARTY: The gang's all here, as Grenier, Ferrara, Connolly, Dillon and Piven reprise their roles.

Cinephiles everywhere will agree that what made the smash hit Sex and the City movie such an appealing treat was that it didn't come off as a feature-length episode of the hit HBO series. Instead, it stood out as a fresh, fun, meaty and boldly original cinematic experience. Sadly, the same can't be said for Entourage, whose just-released big-screen version feels, you guessed it, like an overlong episode of the HBO series. Make no mistake, the writing is pretty decent and, like the TV show, it's reasonably high in entertainment value. Problem is, it's way too thin on the meat to be taken seriously.

Even so, fans of the series will be thrilled to find that the boys remain the adventurous, skirt-chasing sports they've come to know and love ― and their chemistry is as tight as ever. Friendship, brotherhood, loyalty through thick and thin? You'd be hard-pressed to find a close-knit crew more devoted to each other than Vince, hotshot Hollywood actor and perpetual playboy (Adrien Grenier); a slimmed-down Turtle (Jerry Ferrara); Vince's older brother Johnny Drama (Kevin Dillon); Vince's manager Eric (Kevin Connolly); and their loud-mouthed talent agent pal Ari Gold, played with unquenchable bravado by Jeremy Piven. "Their blind loyalty to each other is kind of charming," one observer quips.

Fresh from his quickie marriage in Ibiza, Vince has just landed his directorial debut, an action thriller with a dark edge, being financed by Texas tycoon Larsen McCredie (Billy Bob Thornton), whose awkward son Travis (Haley Joel Osment, all grown up) is sent to Tinseltown to assess the project after it goes over budget and more money is requested.

Long story short, personal grouses get in the way of professional judgements and friction soon develops between the boys and their financiers. As a result, the movie's future becomes uncertain. What subsequently plays out is a piece of comedy-drama that raises questions about studio politics in Hollywood, nepotism, and what happens when business and pleasure ― the strangest of bedfellows ― collide.

They say the more things change: Vince is still a bed-hopping Lothario; Eric continues to grapple with commitment issues; Turtle remains unlucky in love and, as for Drama, the sun still hasn't smiled on his acting career. And Ari is exactly who everyone loves to hate: a high-wired prick in serious need of anger management classes. (BTW, Ari's Asian former assistant Lloyd is getting married.)

With the Entourage movie, writer/director and series creator Doug Ellin had the magnificent opportunity to flesh out these male characters beyond their stereotypical frames. It's an opportunity squandered. What the film seems to capitalize on is the chance to set a record for the most cameo appearances. The movie delivers an impressive number of guest spots featuring mega-personalities like Warren Buffett, Liam Neeson, Kelsey Grammar, Pharrell Williams, Jessica Alba, hip-hop royalty T.I. and Tiny, a sneeze-and-you'll-miss-him Mike Tyson and soccer great Thierry Henry out walking his dog.

So while Entourage diehards will no doubt get a kick out of reuniting with the guys and catching up on their stories, those seeking a more substantive movie experience will either leave the theatre nursing a case of deja vu or just plain disappointed. Tyrone's Verdict: B-