GIRL OF THE MOMENT: Persistence and patience are paying off for actress-singer Belinda Reid 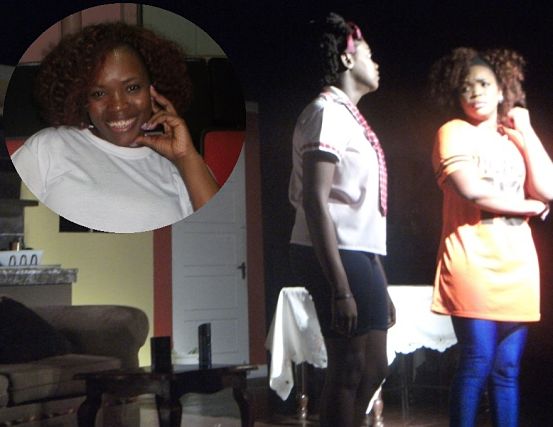 ON A ROLE: "When I remember where I'm coming from I have to be happy with my life," reflects Reid, sharing a scene with costar Dania Brown.

For Belinda Reid, nothing beats having the freedom and energy to try her hand at whatever she sets her mind to ― and excel at it. A relentless achiever ― and still in her 30s ― the actress, singer and mother of three has done it all, from working as a film editor at Mediamix and a production assistant at Television Jamaica to doing sales at the Pegasus.

But to date, theatre, music and motherhood are the passions that have brought her the most success and peace of mind. Adopting the nome de stage Shanty B, she's recorded hit with the likes of Queen Ifrica and Daddy U-Roy and grace the airwaves of BBC One Radio in the UK. As an actress you know her for dynamite portrayals of women fighting for their place in the world (see Her Last Cry and her latest project Force Ripe).

Determined to raise the bar on her achievements and evolve into an even more successful version of her talented self, Belinda Reid (a graduate of the UWI Continuing School and the Cathy Levy Players) says she's keeping her eyes on the prize.

TALLAWAH: In Fabian Barracks' Force Ripe your character is a vicious single mother whose unorthodox parenting methods are called into question. Tell us, what was your mom like as a parent?
Belinda Reid: (Laughs) My mom was a very loving mom, who was also a single parent. A cool woman who is far from Cherry (her character). Mom is in the States now; I'm the only one out her in Jamaica now. She can do anything; my mother is full of strength and I think that's where I got that from.

TALLAWAH: What advice did she give you about men and relationships? Did you two have The Talk?
B.R.: Stay away from them! But I was more of a tomboy growing up, always climbing trees and playing sports. I wasn't the girly-girly type.

TALLAWAH: Force Ripe touches on a series of difficult yet timely subjects, not least among them child abuse, the education system, family and community. What do you hope young audience members take away from the experience of viewing the production?
B.R.: I hope they leave with a much better understanding of issues like these, what's happening in the society. You have those people who feel that certain things must not be said, and the hypocrisy needs to be addressed. And I think Fabian did a very good job of putting the focus on these real issues that everyone can identify with.

TALLAWAH: As an actress what have you been doing to hone your craft?
B.R.: As you know I was with the Jambiz workshop for several years, and whatever I picked up from director like Trevor Nairne I have been building on. All of those techniques and principles are still with me. But every actress needs a good director or coach to work with regularly. No matter how good an actress you are you can become better by working with trained directors.

TALLAWAH: It's interesting that you mentioned that because your character Cherry also moonlights as a prostitute, which must have posed quite a challenge for you. But how did researching the role re-shape your view of the world's oldest profession? B.R.: I think it reaffirmed for me not to judge people. I was brought up that way. These women are out there making a living the best way they know how. I may not approve of it, but who am I to judge? It's survival.

TALLAWAH: I have to ask, do you make a good mother?
B.R.: (Laughs) Of course! Ask anybody. People say I'm the best mother, even in theatre. My twin daughters grew up around the industry. I may not be a perfect mother, but I try my best. My kids pray and read their Bible every day. I do the same as well, and if don't do it for one day I feel like something bad is going to happen.

TALLAWAH: So how will the rest of the Belinda Reid story unfold?
B.R.: I'm always thinking and dreaming big. I want to win Grammys and Actor Boy Awards. I want to open my own production house with a studio; that's like my biggest dream. When I remember where I'm coming from I have to be happy with my life. I feel lucky, and I know a lot of people would love to be in my shoes. I've asked God for a lot of things, and he's blessed me with them in his own way and on his own time, and I know there's lots more to come.

> Catch Belinda Reid and her costars acting up a storm in Force Ripe this month at the Theatre Place in New Kingston.