NO MORE DRAMA: Rising deejay Kalado taps the pain of his past to soldier on to success 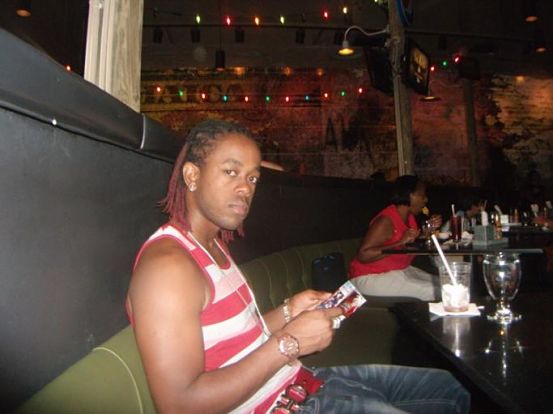 BUILT TO LAST: The entertainer talks about being a survivor and bracing for the journey ahead.

As he gears up to co-headline the much-anticipated Pepsi Refresh Tour and release his sophomore mixtape, Hard Knocks, the fast-rising deejay talks exclusively to TALLAWAH about life lessons learnt, the strides he’s making in the big leagues, and the priceless ‘motivation’ that keeps him on his toes.

Seated at a corner table inside Usain Bolt’s Tracks and Records at Marketplace on a crisp Wednesday afternoon, Kalado is having a flashback moment. As the early lunch crowd warms up with appetizers, the deejay, casually outfitted in a sleeveless muscle-flexing top, jeans and Adidas slippers, recalls a chapter in his youth when dining at such a high-end eatery and sporting pricey designer duds was a scene out of one of his fantasies.

With his eyes downcast, he harks back to age 16, when an argument with his father and stepmother erupted, and he was unceremoniously thrown out of their home in Peckham, North Clarendon. Though there’s no bitterness in his voice, he bristles at the memory and the sequence of events that followed. “I was sleeping on cold concrete for nearly five years after that, and moving from place to place,” he recalls. “That was the worst time in my life.” So while his peers at Edwin Allen High were gearing up for exams in the comfort of their homes, Kalado was sometimes walking for miles, without any clear idea as to where his next meals would come from or where he would spend the night.

UP CLOSE AND ‘PERSONAL’

Nursing a cold Malta as he takes us down memory lane, the entertainer (born Eton Gordon) considers himself the ultimate survivor and says the horror of such vivid episodes in his past is the reason he’s forever thankful he discovered music, the mercurial passion that’s become his saving grace, lifting him up and giving him a brand new lease on life. “Mi hungry fi success,” he emphasizes. “Right now my music is played all over the world, but that’s not even half of what I want to achieve.”

Like quite a few others before him, Kalado is the kind of new artist who brings knowingness and supercharged confidence (some might mistake for arrogance) to the dancehall scene. Consequently, he sounds like a seasoned veteran – not someone just getting his feet wet in the biz.

Drawing on a blend of hardcore dancehall, one-drop reggae, and traces of other genres, he alternately sings and deejays for the fans about money, women and the high life but, by his own admission, his struggles are never far from his mind. In fact, at the core of some of his grittier tunes (like the recent “Ghetto Youth”) you can hear him tapping the pain of his own past experiences to make statements about life and humanity that are reasonably profound. “I like to sing about the struggles,” he tells TALLAWAH. “Life music is real to me.”

Kalado’s profile and popularity in today’s dancehall set-up is certainly on the rise. He’s scored chart-topping and award-winning hits like the party smash “Personally,” but the entertainer makes it clear that the struggle is by no means over. Not even close to being over. “I don’t smile or laugh a lot because I don’t see anything to smile about. That Morgan Heritage song is one of my favourites because it’s talking about exactly what I’m feeling,” says the one-time Jones Town resident, who confesses to having suicidal thoughts around age 19, when depression threatened to extinguish his light. “To find studio and get producers to help me, I don’t know where in Kingston I never walk to.”

A typical weekday for Kalado revolves almost entirely around work: the studio, the gym, on-the-road promotion, the occasional video shoot to coordinate. “My life is dedicated to the music. You might say I’m anti-social because I don’t hang around,” shares the artiste, who keeps a very small team around him and has the ear of influential industry people like Jeremy Harding, Sean Paul’s former manager. “The studio is like my second home. Once we get to the studio we’ll be there all day, and don’t even remember to order food.”

This fierce commitment to building a career that will stand the test of time – his priorities consistently made clear – is something the artiste’s manager and longtime friend, Miguel Noble, can’t help but comment on. “He has that determination, and his work ethic is strong,” Noble says. “And that’s very rare, especially among the younger artistes today. And when those two [qualities] combine, you see the outcome.”

Back at Tracks and Records, Kalado is about halfway through with his Malta, as the conversation switches gears. Unsurprisingly, the deejay is tight-lipped when it comes to his personal life. Has he fathered any children? He won’t say. How old is he, really? His lips are sealed. What we do learn, however, is that the artiste (who is probably approaching his late 20s) maintains a strict bachelor lifestyle and makes no bones about admitting his greatest fear. “I fear failure more than I fear death,” he insists.

Kalado’s second official mixtape, Hard Knocks, a follow-up to 2012’s Sad Streets, drops this month (with contributions from Coppershot and ZJ Liquid). As you’re probably aware, this summer he’s co-headlining the Pepsi Refresh Tour (alongside Denyque, Chi Ching Ching, and others), and on July 18, he’ll make his second solo appearance on the Reggae Sumfest mainstage, making the leap from Dancehall Night to International Night.

Clearly, the deejay’s hard work is reaping rich dividends but, for him, there is no time to stop and savour “the sweet smell of success.” As we speak, he is yet to complete work on the video for “Ghetto Youth”; there’s the tracklist to get ready for fans in Panama, Costa Rica and the Bahamas. And like any perfectionist musician, he must agonize over crafting his next big hit.

Nothing will distract Kalado from the goals he’s set – not the run-ins with the law he’s had to endure or the rumours he’s constantly fighting. “You might say there’s a coldness to me, but it’s because of what I have been through. I’ve never been a happy man,” he confesses. “If I get a #1 song today, it means I have to keep challenging myself because you can lose it in a split-second. So I am constantly worried about not losing it because I don’t want to go back to where I’m coming from.”

> PART 2: The deejay riffs on creative influence, versatility, and his future