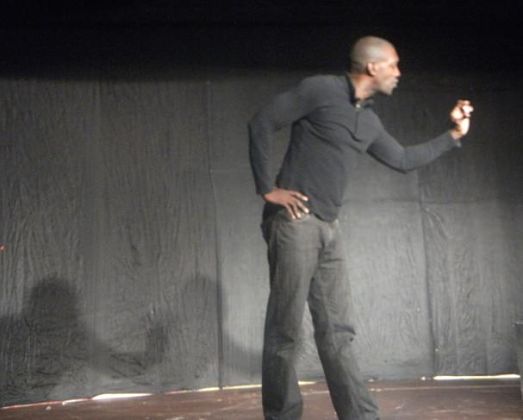 WHOLE AGAIN: Bryan, working the stage in a scene from his one-man play at the Theatre Place in New Kingston

They say you never know where life will take you, and it’s a sentiment that rings true for Stefhen Bryan, the subject, writer, producer and star of the lively one-man show Doodu Boy that compensates with ample humour, passion and mild intellect for what it lacks in dramatic intensity. To say the least, Bryan has had quite a life.

Born and raised in Kingston’s tough Dunkirk community by a strict God-fearing mother, Bryan’s ramshackle childhood gives the play much of its spark in the early moments. A rambunctious kid, he has his own Slumdog Millionaire moment, when he accidentally falls into a cesspool at church, narrowly cheating death – an incident that earned him the nickname of the play’s title and relentless jibing from his peers.

Greater humiliation follows, as Bryan later recalls episodes like the time he went to visit the father who rejected him as a boy, at the old man’s home in the States, only to have the door slammed repeatedly in his face and the police summoned. About the dad he both idolized and despised, Bryan remarks, “The part of me that hates my father makes me want to be better than him.”

Although there is no shortage of family drama, mental health issues, and even thoughts of suicide, the Stefhen Bryan story is not all gloom and painful memories. You cheer him on when he enrolls in Psychotherapy at UCLA and graduates with flying colours at age 30 – and comes back to Jamaica 15 years later to reunite with his mother and grandmother. In one of the play’s most poignant moments, he mends fences with his father, as the old man nears death, the victim of a violent stroke.

Jamaica may have been the land of Bryan’s birth, but it’s during a sojourn in Japan (as a teacher of English) that he experiences an epic rebirth and falls head over heels for a Japanese girl who can’t live without her Al Green.

In the end, the high energy, self-deprecating humour and powers of recall that Brown (now 51) brings to the performance, easily reminds one of the acclaimed one-woman opus, Jamaica Farewell, written by and starring Bryan’s mentor Debra Ehrhardt.

But what makes Bryan’s story compelling, in spite of the shortcomings, is the unflinching candour he channels into those eerie chapters of his past to offer a revealing coming-of-age saga, spun with emotional heft, that conveys the (sometimes shocking) experiences of a man who, when all is said and done, is not easily broken. Tyrone’s Verdict: B