PLAYING THEIR PART: Rotary Club of Trafalgar New Heights give back with star-studded musical fundraiser 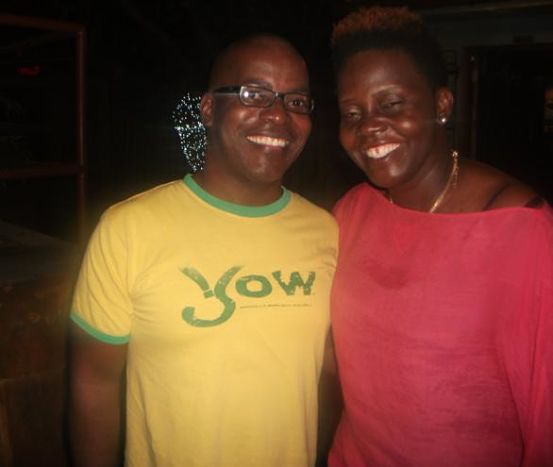 AGENTS OF CHANGE: At the event, Lewis presented Fabian Brown with a token of appreciation for his efforts with youngsters in Seaview Gardens.

“Throughout the year we used the arts as a tool to raise awareness and to foster youth development, so it’s only fitting that we end the season with the arts, while giving back to charity.” This coming from Rotary Club of Trafalgar New Heights' Coleen Lewis as she addressed the sizeable audience - patrons occupying candle-lit tables at the Redbones Blues Café, in support of a musical fundraiser put on by the club on Saturday evening.

“It’s been a rewarding year for us, especially when we look back on what we accomplished in using the arts to teach kids self-confidence and conflict resolution, hosting a technical training camp at the Philip Sherlock Centre, starting a literacy project in August Town and organizing a peace forum at schools like Clan Carthy High,” Lewis, the club's president, later told TALLAWAH. “And we are committed to doing more projects to help kids in various communities, using the performing arts as a catalyst for change.”

On Saturday, the clubmates got a little help from some of their musical friends, ensuring that those who came out to the Redbones event got their money’s worth of entertainment. For the most part, acoustic soul reigned supreme. Rising Stars alumna Tenuke opened the performances with impressive renditions of Bob Marley’s “Redemption Song” and India.Arie’s “Ready for Love”, making way for militant singer-songwriter D’Burnz (a reggae rising star to watch), who delivered a solid mix of covers and original cuts, just ahead of singer McKeehan who struck a chord of his own with numbers like “Miss You Bad.”

The roots-rock-reggae stylings of live-music veteran Duane Stephenson gave the show the crescendo it deserved as he raised the game for everyone with impassioned takes on “Rasta For I”, “Ghetto Pain” and “Cottage in Negril.” Fresh from the release of his debut disc, Reggae Meets Soul: M.E on Love, it was up to Mario Evon to bring the curtains down on the musical segment. He did so with much aplomb, earning applause and shouts of approval from the crowd at the end of tracks like the cheeky “Love In Di Mawnin”, the heartfelt “This Day” and the sing-a-long fave “Soul Tek” mixed with a little Boyz II Men.

Then, as brawta for being such a good audience, emcee Ewan Simpson introduced Chris ‘Johnny’ Daley, who went on to rock the house with an electrifying round of stand-up comedy and social commentary, touching on everything from his inner-city coming-of-age to the uniqueness of the Jamaican church to aggression in the modern dancehall. In short, a fun, ridiculously entertaining and very well-spent evening.