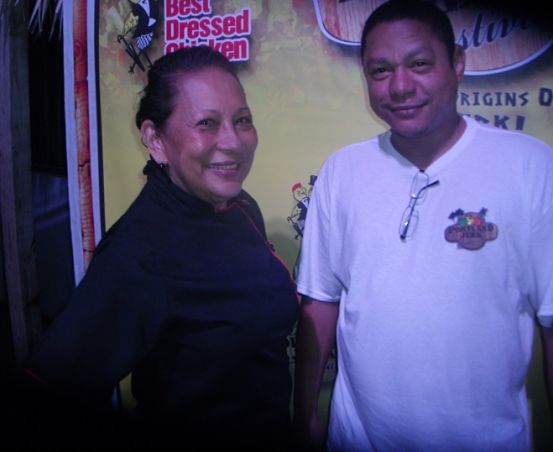 TASTE MAKERS: Chantrelle and Fung share a close up at the festival's launch on Tuesday.

For Bobby Chantrelle, the Portland Jerk Festival belongs to the people of Portland, but it remains an excellent vehicle for showcasing the wonders of Jamaican jerk to the rest of the world. “One of our major goals this year is to let the visitors from around the world know that this is where jerk started, this is where it all begin, and it’s time to take the world by storm,” said Chantrelle, speaking with TALLAWAH at the 15th anniversary launch of the popular tourist event at Barbican Beach on Tuesday. “What the festival has done for Portland is just remarkable to the point where it has become the signature tourist event in the parish, and this year feels like a step up to the next level.”

A special milestone like birthday number 15, where the emphasis is on the continued evolution of jerk as a culinary benchmark, is not to be taken lightly. The new-look Folly Ruins will play host to the event on Sunday, July 5; Chicago’s own master chef Judson Todd Allen will be flying in to whip up a few of his specialties for the crowd; and celebrity chefs like Suzanne Couch, Gary Ferguson and Lorraine Fung are planning to put on a show of their own.

“Fifteen is a young age, but it means that Portland Jerk Festival is growing. At this point the festival can only evolve and get bigger and better,” Fung told us during a rare break from her jerk pan. “That the world is craving Jamaican jerk is something we should be celebrating and show the world how proud we are of it.”

And while Chantrelle and his fellow organizers brainstorm to come up with strategies to better cater to patrons this year (shorter food lines!), he is predicting another stellar staging, hands down, featuring top local and international chefs working their magic to serve a mouth-watering feast of gourmet jerk and traditional jerk favourites. Also in the mix: show-stopping acts Rodney Price, Voicemail, JCDC finalist and Kevin Downswell providing the entertainment package.

“The Portland Jerk Festival is a Jamaican food festival with Jamaican entertainment but with a global reach,” Chantrelle says. “This year in particular we are proud to be highlighting Jamaican jerk to the world. Traditional jerk is still the foundation, but it’s interesting what the different foreign chefs have done with their interpretations of it.”