WHY DID I GET MARRIED?: Young actors sizzle in Patrick Brown’s rip-roaring Hurricane Honeymoon 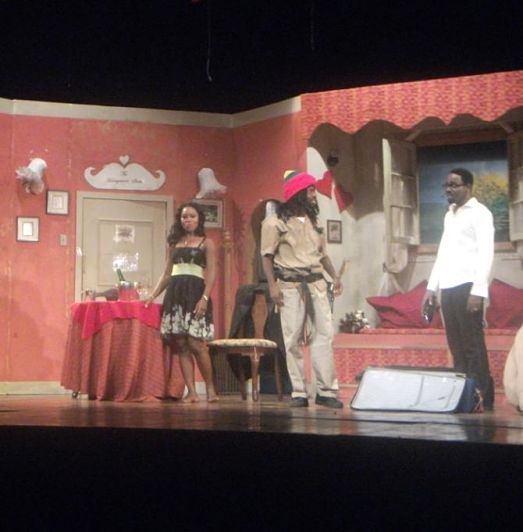 THE SUITE LIFE: Cole, Rowe and Mignott find themselves caught up in a marital spat.

Tempers flare and emotions soar in Hurricane Honeymoon, a remount of the classic Patrick Brown comedy-drama (now playing at the Little Theatre), in which a young Jamaican couple’s first night as man and wife turns into a hellish nightmare, complete with tantrums, slamming doors and howling gale-force winds that threaten to rip the roof off their honeymoon suite.

Splendidly written and solidly acted by a terrific three-member cast – Akeem Mignott has never been better – the show (helmed by Trevor Nairne and Brown) has pulse-racing intensity, flashes of melodrama, and humour to spare as it vigorusly tackles deception and betrayal, young love and radical views on the institution of matrimony.

With the ink barely dry on their marriage certificate, John (Mignott) and Hilda Charm (a superb Natalee Cole) arrive at their suite frolicking like two high-school lovebirds finally away from their parents. In spite of the hotel’s five-star rating, the place leaves a lot to be desired, but John – hormones kicking overtime – couldn’t care less, as he’s eager to take his new bride to bed. And that’ when things start to get, um, awkward and pretty soon take a serious turn.

You see, Hilda has a lot to ‘confess’ and each new revelation hits John like a ton of bricks, unleashing his fury. Holding a front-row seat to all the fireworks and soap-opera-ready drama is Marley (the very funny Ricky Rowe), the hotel’s all-purpose handyman, who provides much of the comic relief when thing seriously heat up. He’s quite an enthusiastic witness.

As Hurricane Irma barrels its way toward Jamaica, can John and Hilda Charm reconcile their differences and move on to happily-ever-after?

As his fans are well aware, Patrick Brown takes on hot-button topics and relationship dynamics in his work with relish, expertly balancing seriousness and lighthearted strokes while giving insightful commentary on human nature and the Jamaican class system. Taking in Hurricane Honeymoon, one can definitely draw parallels with previous hits like Funny Kind A Love – and, strangely enough, recall other plays like Keiran King’s Mr & Mrs Blacke.

But Hurricane Honeymoon, with minor flaws here and there, stands proudly on its own, showing us why trust, patience and honesty remain the key ingredients for lasting relationships. Tyrone’s Verdict: B+