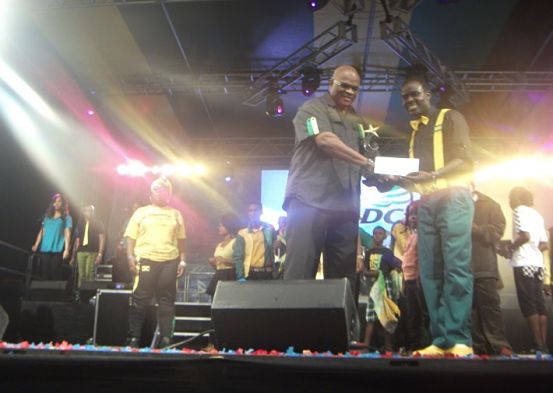 PROUD MOMENT: Johnson accepting one of his prizes from Chairman of the JCDC, Aston Cooke, on Saturday.

The first thing Lee-Roy Johnson did after he was declared the winner of the 2015 National Festival Song Competition at the Ranny Williams Entertainment Centre on Saturday night was his his three-year-old daughter Jenelle onto the stage, as colourful confetti rained down like showers of blessing. His priorities immediately made clear. “Family is everything to me,” he tells TALLAWAH, catching his breath backstage. “It’s my foundation.”

Accompanied by his wife of seven years, Johnson, who goes by the stage name Ancient Priest, made the trip from Manchester into Kingston to put on a show at the grand finals, with his rollicking entry “Celebration Time” – a performance so enthralling that he not only won over the large crowd but secured the lion’ share of votes from the judges to land the most coveted prizes of the night: the championship trophy, a cash prize of $500,000, a gift basket courtesy of Lasco, and the title of best overall performer.

“Celebration Time” may combine the rhythmic flair of soca with a party-starting reggae beat but, as it turns out, Johnson’s musical roots lie in foot-stomping Sunday-morning gospel. To wit, he has toured the world with the legendary Lester ‘Winner Man’ Lewis and was a finalist in the National Gospel Song Competition back in 2010 and 2012 – nabbing a slew of awards, including prizes for best arrangement, lyrics and performance.

“I’m just a simple yout’ that loves God and loves music with my all. So I’d say music defines who I am,” Johnson professes. “I believe I should use my talent to create change, so that’s also how I see myself – as a catalyst for change.”

And don’t let the name Ancient Priest fool you. Biographically, Johnson is a 34-year-old music educator who grew up in Newport, Manchester, and is currently in the throes of reading for a first degree in Music Education at Northern Caribbean University (NCU). So, in addition to treating the wife and kid to something nice for the summer, Johnson’s plans for the prize money includes funding his studies and investing in a music school. “Once I am finished with [the degree programme] I plan to do music full-time,” he says. “I also want to give back, so one of my goals is to teach instruments to kids.”