ARTIST SPOTLIGHT: How NDTC soloist Mark Phinn found his place in the world of modern dance

In the galaxy of elite dancers who populate the National Dance Theatre Company’s principal corps, Mark Phinn is, quite possibly, the most enigmatic; a lavishly talented artist who shies away from the spotlight. “I’m usually the one fighting for the back. I don’t like being up front,” admits Phinn, whose medium built frame stands close to six feet, making him virtually impossible to hide when the dancers hit centrestage. In a word, Mark shines, exhibiting that winning combination of agility, technical rigour and finesse that makes him a joy to watch.

That he’s such an appealing character who can brilliantly transform mid-performance is one of the reasons it’s so interesting to hear him talk about his approach to his craft. “Dance and I have a love-hate relationship, but it is something that means the world to me,” he tells TALLAWAH, seated behind a work desk inside the company’s cozy little upstairs office on the Little Theatre complex, a day before the 2015 season is scheduled to open. “I am a very visual dancer, and I can be very hard on myself. So I’ll do a sequence and tape it and watch it over and over, and I won’t stop critiquing it. I’m very critical of myself.”

Mark Phinn the dancer could have been Mark Phinn the record-breaking track superstar. While making the transition from primary school standout to Ardenne High freshman, the boy’s phenomenal speed had everyone close to him setting their sights on athletics career if the academics didn’t work out. “I was very quick. I used to sprint on my toes, so they all thought I was a natural,” Mark remembers. But talk about a dream denied. “One day in first form I was practising on the school field, and I stepped into a sinkhole, and my knees and my ankles got seriously damaged.”

Though everyone was saddened at such an unexpected turn of events, track-and-field’s loss was to be dance’s gain. At the dawn of the 1990s, as fate would have it, Mark was introduced to the leisure dance programme at the Edna Manley College and soon enough discovered that he had some rhythm in his bones and liked shaking his groove thang. “I kept going back and I never stopped,” he recalls. “I attended the summer school after that, and then I got invited to the training classes here [at the NDTC].”

And that’s how and where the late great Prof. Rex Nettleford entered his life. The rest, as they say, is history. “My first year with the NDTC was in 1999, doing one dance,” Mark recalls, laughing. “It might have been Gherrebenta.” But he gets serious again when paying homage to Prof. Rex. “For me, the greatest thing about being in the NDTC family is that I go to work with Prof. He was such a disciplinarian,” he says, adding that Nettleford not only took him under his wing as a rising talent in the company but took an interest in his overall well-being. “With his help and his advice I was able to improve myself a lot. I went back to school and did Library Studies at EXED. Prof. basically helped me to straighten out my life.”

And look at him now, beaming like the star boy who’s done his papa proud. Today, at age 39 (he looks more like a mischievous 25-year-old), Mark Phinn, the youngest of four kids from a political Gordon Town family, serves as the official archivist of the National Dance Theatre Company, charged with documenting the company’s history as it unfolds, while keeping tabs on their storied legacy and, as he tells it, “keeping everything in order.” “It is a bit taxing at times. There is so much history to go through. Everyday you learn something new,” says Phinn, who has also taken over the reins of the company’s presence on social media. 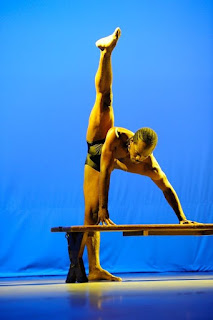 In the meantime, as the NDTC unveils its 2015 repertoire at the Little Theatre in Kingston this month, Mark is already looking ahead to a time when more Jamaican men will embrace the world of interpretive dance. “I don’t know why they are so scared,” he reflects. “I want to see more males become part of the local dance community.” He’s also challenging the NDTC to further widen its reach as the company heads into its seventh decade. “I would like for us to go out more into the country,” he says, “for performances and to do some workshops.”

Alongside works by Shelly-Ann Maxwell, Troy Powell, Chris Walker, Renee McDonald and Nettleford, patrons will be treated this season to a remount of “Don’t Leave Me,” choreographed by Jamie Thompson. And Mark, of all people, won’t be able to retreat into the background to hide from the spotlight. It’s his popular solo number that positions him front and centre. Where he truly belongs.

MUSIC: “I enjoy listening to instrumentals and classical music. I like reggae but I’m not that big a fan.”

FOOD: “The best thing I can cook is chicken pasta. And porridge.”

MENTOR: “Michael Clarke, who is a former Director of Museums at the Institute of Jamaica. He is now based in the UK, but he’s one of the first persons who encouraged me to seriously pursue something in the arts.”

BOOKS: “I don’t get a lot of time to read books that aren’t NDTC-related or dance-related. I like that whenever people ask questions about the company I can answer convincingly.”