MAN OF THE MOMENT: Living his musical dreams, Omi gives fans something to 'cheer' about 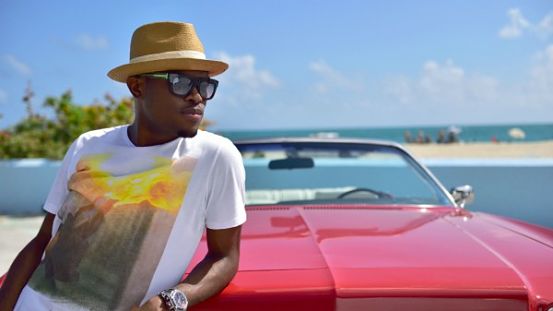 EYES ON THE PRIZE: Is the singing sensation the next big thing from the region?

Burgeoning reggae-pop singer Om probably never expected to hear and see his name mentioned in the same sentence as Taylor Swift and the like so soon in his career, but now that his song “Cheerleader” has metamorphosed into a megahit (thanks to a tuneful new remix), taking on a life of its own internationally, these days life is sweet for the Jamaican rising star.

Though originally recorded and released in 2012, “Cheerleader” is finding new life and racing up the charts, which means that the artiste’s management and marketing people are doing their jobs.

The numbers don’t lie. “Cheerleader” was one of last week’s most downloaded songs (with over 146,000 units sold, according to Billboard, topping Taylor Swift’s five-week run with “Bad Blood”. On USA Today’s current Top 100 list, it has newly cracked the Top 20. And, it has landed at number one on charts across the Caribbean, not to mention Australia and the UK. Bonus: music critics have hailed the jam as a bonafide song-of-the-summer contender in the United States, where it has tallied more half-a-million downloads in total, per Nielsen Soundscan.

Born Omar Samuel Pasley, Omi seems to be taking his newfound success in stride, vowing to stick the game plan that has catapulted him to the here and now, and has him poised to become the Caribbean’s next big thing. To some, Omi oozes that Sean Kingston-meets-Hal Linton vibe, but with an island authenticity that’s all his own. Defining himself as an artiste, he recently told an interviewer, “I try very hard to incorporate music that is indigenous to Jamaican culture, as well as embracing that worldwide appeal.”

Riffing on his daily routine, however, he admits to spending countless hours holed up in the studio, writing and laying down vocals. He cites Grammy nominee Meghan Trainor (“All About That Bass”) among his dream collaborators. But does he feel any pressure to evade the one-hit-wonder jinx? “There is no pressure to write. There is pressure to release, but you have to know the timing,” the 29-year-old singer points out. “So the pressure is not on me; it’s mostly on management and my label.”

>THIS IS THE REMIX: Take a listen to “Cheerleader”

> WATCH THIS: Check out the “Cheerleader” video clip

Email ThisBlogThis!Share to TwitterShare to FacebookShare to Pinterest
Labels: In The Mix, Man of the Moment, Music Headlines, Omi, Ones To Watch